We have had reports in the past week of broad mites causing crop injury, including multiple reports of damage to New Guinea impatiens and a case on begonia that was confirmed by UMass Extension's Plant Diagnostic Lab.  Broad mites are tiny piercing and sucking insects that prefer to feed on young developing leaves and buds.  Broad mites inject phytotoxins as they feed, which interfere with normal plant cell functioning and result in growth that is twisted and distorted.  Since the mites are not easily seen with the naked eye, this distorted growth is often the first indicator that there is a problem.  In the case on begonia, it is suspected that the broad mites came into the greenhouse on infested plant material.  This example emphasizes the importance of closely inspecting incoming plants, as well as thorough and regular monitoring using magnification.  Proper greenhouse sanitation before the season begins is also an important measure for controlling populations of broad mites.

For another, more detailed report on broad mites from the same time last year, see the Greenhouse Update from April 19, 2018: https://ag.umass.edu/greenhouse-floriculture/greenhouse-updates-apr-19-2018

For a comprehensive fact sheet on broad mites and cyclamen mites, refer to: https://www.bookstore.ksre.ksu.edu/pubs/MF2938.pdf 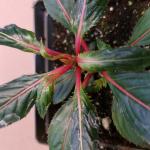 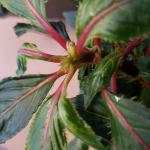 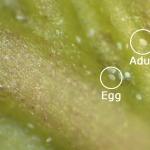