Chilling injury was observed on some crops in greenhouses this week due to low temperatures that have occurred over the last few weeks. Chilling injury is different from freezing injury, but both have similar symptoms which include tissue browning, blackening, wilting, or curling of leaves and stems. Freezing injury affects plants when they are exposed to temperatures below 32°F. Because of dissolved salts, water in plant tissue typically freezes a few degrees below 32°F, but this freezing leads to cell and plant tissue death. Chilling injury does not involve freezing, but instead occurs when cold sensitive plants are exposed to cold temperatures above the freezing point (32°F to 55°F). Commonly, chilling injury damage is first seen on leaf edges and progresses to cover a larger area.  Affected tissue may look necrotic, purple, or even bronzed.  Leaves may appear curled or folded inwards.

Plants from tropical origins are typically more sensitive to chilling injury, but most plants from temperate climate origins are less susceptible. Despite the lack of freezing, chilling injury can still be lethal - some tropical/subtropical crops classified as cold sensitive such as basil, coleus, lantana, portulaca, sweet potato vine, and vinca may not survive if exposed to chilling temperatures below 42°F. For crops classified as cold intermediate such as dahlia, geranium, impatiens, lobelia, and wax begonia, growth stops if they are exposed to chilling temperatures below 40°F. Crops classified as cold tolerant such as dianthus, diascia, heliotrope, American and French marigold, nemesia, osteospermum, snapdragon and viola can survive temperatures below 39°F but above freezing (32°F) without injury.

To prevent chilling injury, carefully maintain the air temperature in the greenhouse above the minimum temperature requirement for the most cold sensitive crops in the house. If temperatures drop below the threshold, air temperature should be raised before you see injury to the plants. The best chance to save a crop is to minimize the length of time plants are exposed to chilling temperatures. Some plants will recover fully after removing affected leaves. Removing injured or necrotic foliage is also beneficial in preventing secondary pathogen infections. 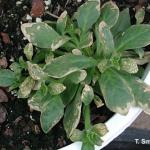