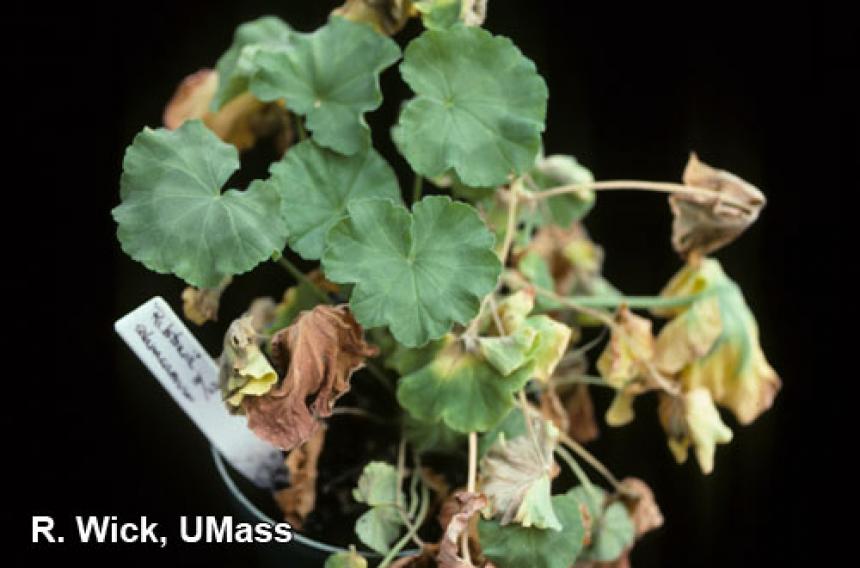 The Southern bacterial wilt disease of geraniums is caused by two races of Ralstonia solanacearum, Race 1 and Race 3. Race 1 is found in the southern United States, and has occasionally affected geraniums in greenhouses or landscapes. Race 3, however, is not found in the United States, and is therefore regulated by a federal quarantine. R. solanacearum Race 3, Biovar 2, has valuable agricultural hosts as well as a few known ornamental hosts. It is of special concern to the potato industry in the United States and Canada, because Race 3 is a cold-temperature tolerant strain that has caused serious disease problems in potato crops in other temperate countries around the world.

Since this is a regulated disease, any suspicious looking wilting plants, along with pots and soil, should be placed into sturdy garbage bags right at the bench and then held in a cool area until they can be tested. Don't carry pots with wilted plants out of the greenhouse: bring the bag to them so that potentially contaminated growing medium won't be dropped on the floor. If you suspect you have Ralstonia or Xanthomonas we recommend that you isolate any wilted geraniums, but do not discard them until a diagnosis of the cause is confirmed. For diagnosis, contact UMass Extension Plant Diagnostic Lab at 413-545-3209 or mbdicklo@umext.umass.edu. If you get a confirmation for Ralstonia from the lab, then notify the Director of Regulatory Services, Massachusetts Department of Agricultural Resources, (617) 626-1771 and your supplier. The Director will work with the grower to follow proper procedures in order to prevent further movement. It is very important that we do everything possible to contain and eradicate this disease. Do not discard any sick geranium plants by simply putting them in the compost pile. 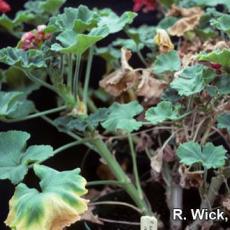