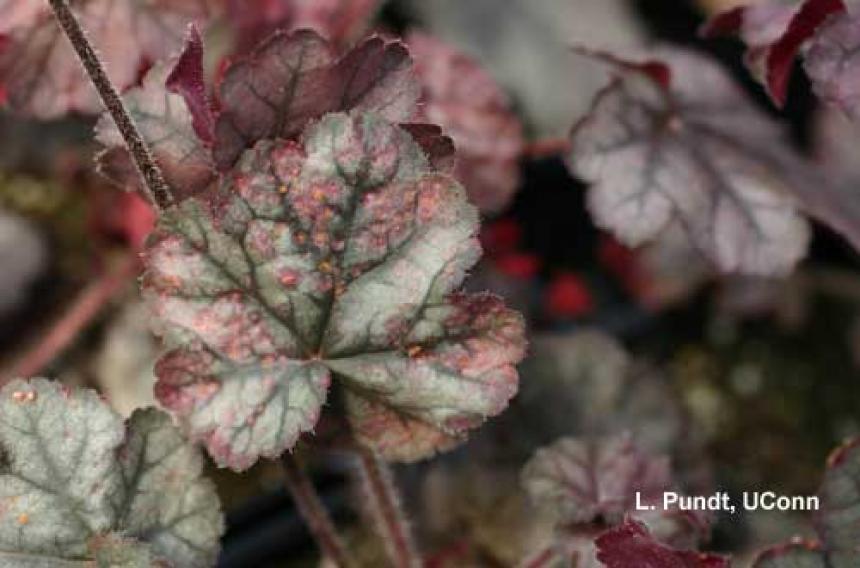 Rust on heuchera is caused by the fungus Puccinia heucherae . This fungus is only reported on Heuchera and Saxifraga. It will not spread to other types of perennials susceptible to rusts such as daylilies, hollyhock, campanula or ornamental grasses. Look for spots on the upper surface of the leaves. Raised eruptions develop on the lower surface. (See photos). If you tap the foliage over a sheet of white paper, you may see an orange, rust-colored smudge. These small, rust spores are spread from plant to plant by air movement.

Rust diseases are a common fungal infection that affect a wide range of floricultural crops, including Aster, Carnation, Fuchsia, Florist's geranium ( Pelargonium X hortorum ) Gladiolus, Lilium, Marigold, Poinsettia, Snapdragons, Statice and Viola (including pansy). Rusts have the potential to negatively impact floriculture production because these pathogens often cannot be detected on infected, but symptomless propagation material entering the United States or moving state-to-state. Rust fungi are obligate parasites, dependent upon a live host for growth and development, and seldom kill plants. However, rust infection reduces plant health and vigor, flower production, and aesthetic value. Purchase only disease free plants or cuttings. Carefully inspect all incoming plant shipments for rust symptoms. Keep new plants isolated from established plants for up to three weeks to allow rust diseases to develop, if present. Scout regularly for rust diseases. Frequently remove all rust-infected leaves and badly infected plants and destroy by burning, rapid composting, or burying At the end of the growing season, carefully clean up and destroy all crop debris. Sterilize benches and propagation rooms with an appropriate greenhouse disinfectant. Keep the humidity within the greenhouse at less than 80%. Increase air movement by adding fans which will prevent moisture from condensing on the foliage. Practice only surface watering and avoid splashing water onto foliage. If overhead irrigation is necessary, water in the early morning when plants will dry quickly. Space plants far enough apart to allow for good air circulation. In the case of outside varieties, such as rose or Violas , in the fall, carefully clean-up and all leaf litter and destroy. Severely infected roses can be dramatically pruned. A combination of cultural and chemical control is often required to control rust diseases. There are many effective rust products and these should be applied on a protective basis according to label instructions. Be sure to rotate applications between chemical classes to prevent fungicide resistance from developing.

Link to the fact sheet: Rust Diseases on Ornamentals