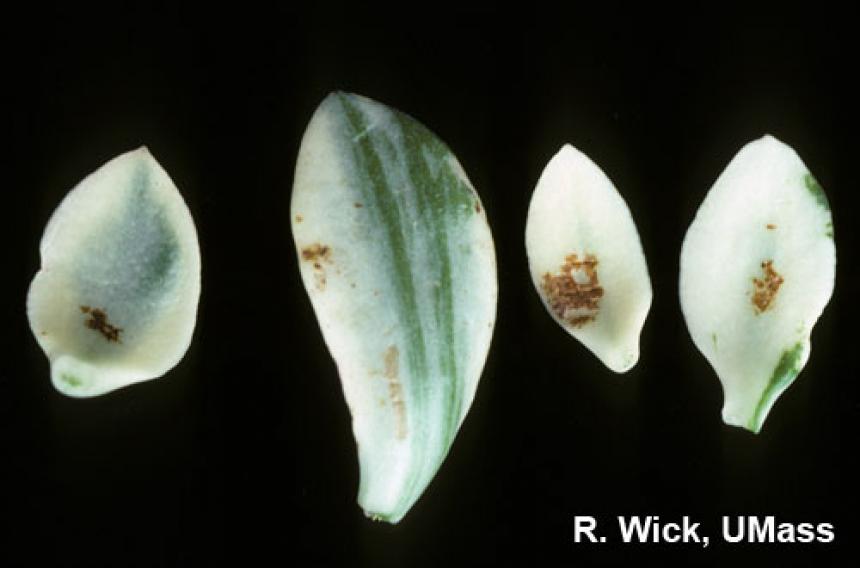 Note: On succulents, Powdery Mildew symptoms are not characteristic.

The disease is easily recognizable as a white to gray powdery growth on leaves and sometimes stems and flowers. Powdery mildew may have little or no affect on the plant (other than aesthetic) or it may cause infected leaves to distort, discolor, wither, and defoliate prematurely. Most Powdery mildews have evolved to avoid killing their hosts because they can only survive in living plant tissue. Symptoms and their severity depend upon the cultivar or species of host plant, the powdery mildew species, environmental conditions, and the age of plant tissue when it first became infected.

Monitor crops on a regular basis for Powdery mildew diseases. Epidemics that seem to develop overnight are often the result of undetected low level infections that have spread spores throughout the greenhouse. Rogue infected plants or prune out diseased tissue. Perform this operation when plants are wet or immediately place diseased material into a plastic bag to prevent spores from spreading. The use of resistant cultivars or species is a good management tactic. Although few ornamental crops have been bred for resistance, cultivars of African violet, Begonia, rose, pansy, Zinnia, Monarda, and Phlox with resistance are available. Avoid overcrowding of plants and provide good air movement. Keep relative humidity levels low in the greenhouse by a combination of heating and venting in late afternoon and early morning. Clean greenhouse thoroughly between crops, eliminating all weed hosts and volunteer plants. Unlike most fungi, powdery mildews only colonize the surface of plants making chemical eradication possible. Fungicides with the active ingredients propiconazole (Banner Maxx), myclobutanil (Eagle, Systhane),triadimefon (Bayleton, Strike), fenarimol (Rubigan), thiophanate methyl(Cleary's 3336), potassium bicarbonate (Armicarb, MilStop), or sulfur are registered for Powdery mildew control on ornamentals. Sulfur may cause plant injury if applied when temperatures are high (greater than 85° F). Because the genera and species of fungi causing Powdery mildews are diverse, there may be some variation in fungicide effectiveness across crops. The Powdery mildew fungi can develop resistance to any of the fungicides, except sulfur, listed above so be sure to alternate fungicide applications among chemical classes.