These poinsettias were diagnosed with Fusarium wilt and also an infestation of fungus gnat larvae.

Plants were wilted and roots were brown and soft. No root pathogens were detected on microscopic examination. Both plant crowns were slightly soft, and crown rot with a distinct brownish discoloration was observed. Crown sections were cultured on selective media in the laboratory and incubated for two days. Fusarium grew out of these sections. In addition, fungus gnat larvae were observed beneath the epidermis on the crowns. Feeding by fungus gnat larvae damages roots and causes wounds through which vascular pathogens such as Fusarium can enter plants.

Fusarium oxysporum is a soilborne pathogen that can cause wilt, decline, and death. The first signs of this disease are yellowing of foliage, stunting, and wilting often along one side of plant. Plants may appear water stressed and foliage may brown and die. Fusarium is spread in contaminated soil and infected cuttings and is favored by warm temperatures, high relative humidity, overwatering, and poor drainage.

Fusarium diseases on ornamentals are difficult to control.  Prevention is the best approach, even when fungicides are used.  The most effective fungicides generally work best when the plants are produced with minimal stress and all cultural control steps are taken to reduce disease pressure. 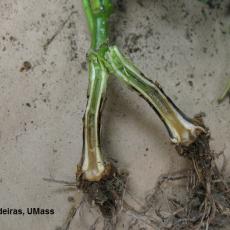 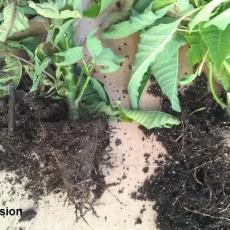