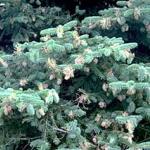 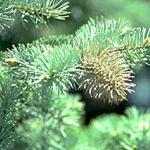 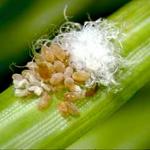 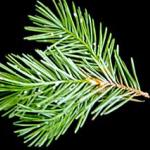 Feeding activity of the newly hatched nymphs, early in the spring, causes the entire new shoot of blue spruce (primarily) to become a gall. These nymphs continue to mature within the gall throughout the summer. By late August, the galls dry and crack open, whereupon, the still immature adelgids emerge. The new shoot, which had been transformed into a gall, is now a dead tip on the host plant. On Douglas fir, these adelgids feed on the needles and do not stimulate gall formation but their feeding can cause yellow spots and kinking of the needles. Wherever Colorado blue spruce and Douglas fir occur in close proximity to one another, the problem is magnified greatly on both species. Also see the Eastern Spruce Gall Adelgid.

The Cooley spruce gall adelgid has a rather complex life cycle that can involve both Douglas fir and a spruce species. Over-wintering immature females at the base of the buds on Colorado blue spruce will develop quickly in the early spring and produce eggs that soon hatch and the nymphs begin feeding at the base of the buds. This feeding stimulates the newly emerging shoot to become a gall that encompasses the entire shoot. The young adelgids will be inside of these galls. By late August, these galls dry and crack open allowing the immatures to crawl out onto the stems where they will complete their development into the winged adult female stage. If a Douglas fir is available, they will migrate there and lay eggs upon the needles. White, waxy ribbons will surround these eggs. These eggs on the Douglas fir will over-winter and hatch the following year. Once mature, they will migrate to a spruce. Development takes two years for this insect species. If a Douglas fir is not near by, the Cooley spruce gall adelgid can pass through all of its life stages successfully on spruce. However, the damage will be much less severe when only the spruce species is available.

Over-wintering nymphs on spruce become active between 22 and 91 GDD.

Galls dry and crack open, on spruce, between 1850 and 1950 GDD (approx. mid-late August in Massachusetts).

Eggs hatch on Douglas fir around mid-June (in Massachusetts) or approximately 500 to 600 GDD.

From a cultural practice standpoint, Douglas fir and susceptible spruces such as Colorado blue spruce, should not be planted within close proximity to one another.

On Colorado blue spruce, a dormant oil spray can be used to suffocate the over-wintering adelgids prior to budbreak and gall formation but it is important to note that these horticultural oils will cause the needles to turn from a blue to a green color for perhaps as long as three months. The structure of the wax on the needles of Colorado blue spruce refracts light in such a way that the human eye perceives them as being blue. Oils will be temporarily absorbed into this wax and alter the light refractory qualities. Applicators should make this point clear to any prospective clients prior to application.

Oils can also be applied to Douglas fir for management of the eggs and nymphs prior to migration back to a blue spruce. Chemical sprays are also labeled for all but the egg and gall stages.