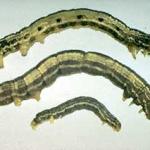 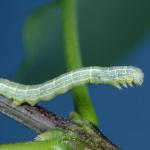 Fall cankerworm (Alsophila pometaria) is a common native pest in Massachusetts. The caterpillar (larval) stage feeds on the leaves of hardwood trees, and the adults emerge as moths in the fall (thus the name fall cankerworm). Populations of fall cankerworm are typically too low to require intervention. However, populations can build up over several years, leading to major outbreaks that may last two to three years before populations fall again due to natural predation and other factors that influence their numbers.

Almost any hardwood can serve as a host for fall cankerworm. Preferred hosts include ash, basswood, beech, black cherry, red maple, sugar maple, red oak, and white oak. Apple, birch, dogwood, elm, hickory, linden, etc. may also be defoliated, especially if they are planted near or underneath more preferred hosts.

There is one generation per year of fall cankerworms in Massachusetts. Eggs hatch during leaf emergence in approximately mid-May, and larvae immediately begin feeding on young leaves. Larvae are long and cylindrical, hairless, and range in color from light green with pale stripes running the length of their bodies, to green with dark brown or black stripes, to almost entirely black. An increased number of dark-colored fall cankerworms can be a sign of a heavier infestation. Known as loopers, or inchworms, the larvae have a space between the six legs (3 pairs) on the thorax (hardened thoracic legs) and “three*” soft, fleshy prolegs on the abdomen, causing them to “inch” along. (The third pair of prolegs is the main morphological difference between the fall cankerworm and the spring cankerworm caterpillar, which has only two pairs of prolegs. *Some refer to fall cankerworms as having 2 and ½ pairs of prolegs, as the pair furthest from the rear of the caterpillar is shorter, almost half the length, of the other two.) Larvae eat voraciously for about 4-6 weeks, growing to be about an inch long, and are active until roughly the end of June in Massachusetts. Once mature, they spin a silk strand to lower themselves down to the ground, where they create a cocoon of silk and soil particles to pupate. Fall cankerworms emerge from their cocoons after the onset of freezing temperatures, typically during November-January. Male adults are winged moths. Their wings are light brown with white bands, and their wingspan measures 25-35 mm. Female adults are brownish-grey wingless moths, 12-15 mm long. To those unfamiliar with female fall cankerworm moths, these insects do not look like moths at all. After adult emergence, females crawl up a nearby host tree and mate with males. Female fall cankerworm moths then lay about 100 eggs in compact rows on the upper branches of the tree. Each egg is less than 1 mm in diameter, vase-shaped, and dark brownish grey with a dot and a ring on the top. Eggs overwinter until spring.

Older larvae eat every part of the leaf except for the midrib and major veins, completely consuming them. Most years, the level of feeding is not high enough to damage the overall health of the tree. Otherwise healthy host plants can survive a single year of complete defoliation. However, if there are severe infestations that lead to complete defoliation for multiple years, or the host plant has other biotic (insect pests, pathogens) or abiotic (drought, flooding, etc.) stressors, the host tree may die.

High levels of infestation may be a nuisance in midsummer when larvae are lowering themselves from the tree in public areas, as they may land on people nearby.

Adult male fall cankerworms also are very attracted to holiday lights or other outdoor lights at night. This behavior is also observed with adult male winter moths as well as Bruce spanworm (Operophtera bruceata). Adult males of these three species, particularly winter moth and Bruce spanworm, can be very difficult to differentiate without entomological training.

As stated above, most years there is no need to manage fall cankerworms, as they will not cause high levels of damage to their hosts and their populations are managed by natural enemies (predators, parasitoids, etc.). However, during population outbreaks or on select specimen trees, if high populations of this caterpillar are found through monitoring, management may be necessary until natural enemies reduce the population back below damaging levels.

To prevent some, but not all, adult females from crawling up host trees to lay eggs, sticky bands can be used. A layer of cotton batting should be placed around the tree trunk, and then plastic with a sticky coating (ex. Tanglefoot) is applied over the batting layer. The batting layer fills holes or cracks in the trunk that the female moth could use to crawl underneath the plastic band. It also protects the tree bark from any adverse effects of direct contact with the sticky substance. Put up the sticky trap/band after leaf fall and the first hard freeze. This method varies in its efficacy. The female moths, although flightless, are adept at finding suitable locations to lay their eggs. (For example, some suggest that if branches touch between two trees, and only one is given a sticky trap, adult females may be able to cross into the tree with the trap by moving from branch to branch.)

This method of mechanical management requires frequent monitoring. If the sticky trap becomes too covered with moth bodies or debris, female fall cankerworms will use the covered areas to safely avoid the trap. Therefore, it must be checked and replaced as necessary.

Several species either prey on or parasitize fall cankerworm.

Ground beetles, such as Calosoma frigidum, are particularly known for feeding on fall cankerworm larvae. Other birds, insects, spiders, and small rodents may also feed on all life stages of fall cankerworm.

There are also bacterial and viral diseases that help regulate both fall and spring cankerworm populations in North America.

Fall cankerworm is susceptible to various insecticides. Reduced risk insecticide options include any product containing Btk (Bacillus thuringiensis Kurstaki), which should be applied to foliage in the spring, when the larvae are less than three-quarters of an inch long and actively feeding, in order to be effective.

Other reduced risk insecticides include, but are not limited to: azadirachtin, Bacillus thuringiensis Aizawai, Beauveria bassiana, Chromobacterium subtsugae, horticultural oil, neem oil, and spinosad. Note: spinosad is toxic to pollinators until it dries on foliage, after about 3 hours, and should not be used when pollinators are active or applied to plants in bloom.

Additional active ingredients labelled for use against fall cankerworm include but are not limited to: abamectin, acephate, acetamiprid, bifenthrin, carbaryl, and permethrin.

Remember when using pesticides that the label is the law. No product should be used in a manner that is contrary to its label. Read and follow all label instructions for safety and proper use. Make sure that the product you select is labelled for use against the pest you wish to manage, on the site to which it will be applied.