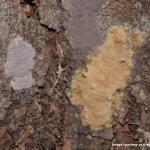 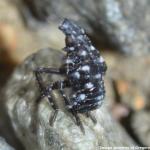 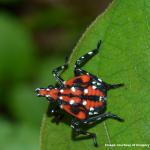 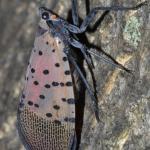 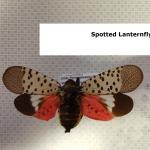 The spotted lanternfly (Lycorma delicatula), also known as a lanternmoth, is neither a fly nor a moth. This insect is a member of the Order Hemiptera (true bugs, cicadas, hoppers, aphids, and others) and the Family Fulgoridae, also known as planthoppers. This non-native species was first detected in the United States in Berks County, Pennsylvania and confirmed on September 22, 2014. The first established (breeding) population in Massachusetts was detected in the city of Fitchburg (Worcester County) in 2021. A small population was announced by the MA Department of Agricultural Resources (MDAR) on Sept. 28, 2021, here: https://www.mass.gov/news/state-agricultural-officials-discover-invasive-spotted-lanternfly-population-in-worcester-county . Since then, additional populations of spotted lanternfly have been detected in Worcester County (Shrewsbury, MA in January, 2022; Worcester, MA in September, 2022). As of August of 2022, a population of spotted lanternfly has also been detected in Hampden County, MA in the city of Springfield. For more information about SLF in Springfield, visit: https://www.mass.gov/news/state-agricultural-officials-ask-residents-to-report-sightings-of-the-invasive-spotted-lanternfly .

The spotted lanternfly is considered native to China, India, and Vietnam. It has been introduced as a non-native insect to South Korea and Japan, prior to its detection in the United States. In South Korea, it is considered invasive and a pest of grapes and peaches. A 2014 United States Department of Agriculture (USDA) Animal and Plant Health Inspection Service (APHIS) bulletin states that the Pennsylvania Department of Agriculture found significant populations of the spotted lanternfly at multiple properties at the time of its detection, including residential properties and a commercial property with a specialty stone business. That particular company was stated to import over 150 shipments from China, India, and Brazil annually, according to the USDA APHIS bulletin. In addition to Pennsylvania and Massachusetts, there are known established populations of SLF in Connecticut, Delaware, Indiana, Maryland, New Jersey, New York, Ohio, Virginia, and West Virginia at this time.

The spotted lanternfly has been reported feeding on over 103 species of plants, according to new research (Barringer and Ciafre, 2020) and when including not only plants on which the insect feeds, but also those that it will lay egg masses on, this number rises to 172. This includes:

Adults are 1 inch long and ½ inch wide at rest. The forewing is gray with black spots of varying sizes and the wing tips have black spots outlined in gray. Hind wings have contrasting patches of red and black with a white band. The legs and head are black, and the abdomen is yellow with black bands. Early instars (immature stages; 1st, 2nd, and 3rd instar) are black with white spots. By the last immature stage, the 4th instar, they develop red patches in addition to the black color with white spots. This is the last immature stage before they mature into an adult. Both the immature insect and the adult are quite visually striking. Adults are especially so when they have been startled and expose the bright red coloration on the hind wings. When the adult is at rest, particularly on the trunk of the tree of heaven, their gray, spotted color may actually cause them to blend in with their surroundings. Freshly laid egg masses appear as if coated with a white substance. As they age, the egg masses look as if they are coated with gray mud, which eventually takes on a dry/cracked appearance. Very old egg masses may look like rows of 30-50 brown seed-like structures aligned vertically in columns. Coated egg masses may look like “weird gypsy moth egg masses”, an insect we are more familiar with here in Massachusetts, but they are not.

The timing of the life cycle of the spotted lanternfly may be different locally (in MA) from what is described here. As with most insects, the timing of their life cycle can vary slightly given local temperatures. The following information is based on observations reported from Pennsylvania, but this will be updated for Massachusetts as more information becomes available.

There is one generation per year. Spotted lanternfly eggs are the stage that overwinter. These eggs hatch sometime in May and nymphs (immatures) undergo four instars. 1st, 2nd, and 3rd instars are black with white spots. These immatures will feed on the various host plants listed above, depending upon availability. These early instars have been found to move up and down the host plant on a daily basis as they feed. This makes capturing some of them with sticky bands placed around host plants, such as tree of heaven, possible. Older spotted lanternflies (including adults) do not tend to be captured by that technique. The final immature stage, the 4th instar, develops red patches over these black and white spots and are typically present in July. Within the same month, these 4th instar nymphs develop into adults who have been described as weak fliers, although they have wings. As you would suspect from a planthopper, however, they are capable of jumping and may use their wings to aid them while doing so. Adults may gather in large numbers. In the fall, the adults are frequently found on tree of heaven; however, they disperse widely to lay their eggs. The adult female spotted lanternfly lays brown/tan, seed-like eggs in rows on host plants and other smooth surfaces. These rows are often oriented vertically, and then covered with a gray, waxy secretion from the female (it is white when first secreted, and then quickly turns gray-brown in color). Sometimes the eggs are completely covered by this substance, other times they are not. Each mass can contain 30-50 individual eggs, and researchers in Pennsylvania believe each female lays at least two of those masses each season. As the egg mass ages, the gray waxy coating will crack and looks even more like dried mud. Eggs are laid starting in September and this can continue through late November or early December. Eggs overwinter, hatch in May, and the life cycle continues. Based on observations from Pennsylvania, eggs can be found, if this insect is present, between October – May.

The adults and immatures of this species damage host plants by feeding on sap from stems, leaves, and the trunks of trees. In the springtime in Pennsylvania (late April – mid May), nymphs (immatures) are found on smaller plants and vines and new growth of trees and shrubs. Third and fourth instar nymphs migrate to the tree of heaven and are observed feeding on trunks and branches. Trees may be found with sap weeping from the wounds caused by the insect’s feeding. The sugary secretions (excrement) created by this insect may coat the host plant, later leading to the growth of sooty mold. Insects such as wasps, hornets, bees, and ants may also be attracted to the sugary waste created by the lanternflies, or sap weeping from open wounds in the host plant. Host plants have been described as giving off a fermented odor when this insect is present. Death of ornamental trees as a result of spotted lanternfly feeding has not yet been reported. However, in Pennsylvania, death of some tree of heaven and flagging on black walnut has been seen. In landscapes, spotted lanternfly is mainly a nuisance. In vineyards, however, this insect has killed grape vines in Pennsylvania. They report that grape vines that had significant feeding by SLF either produce mainly nonfruiting shoots, or die the following year. They note preliminary studies that indicate that spotted lanternfly may reduce the hardiness of grape vines, leading to winter damage of bud or vascular tissue.

Adults are present by the middle of July in Pennsylvania and begin laying eggs (as described above) by late September and continue laying eggs through late November and even early December in that state. Adults may be found on the trunks of trees such as the tree of heaven or other host plants growing in close proximity to them. The USDA states that dusk is a great time to inspect your trees or other host plants for signs of this pest, as the insects tend to gather in large groups on the trunks and stems of plants at that time of day.

Tree of heaven and other host plants, bricks, stone, lawn furniture, recreational vehicles, play structures, gazebos, fencing, and other smooth surfaces can be inspected for egg masses. Egg masses laid on outdoor residential items such as those listed above may pose the greatest threat for spreading this insect via human aided movement.

There is no reason to be preemptively treating for this insect in other areas of the Commonwealth at this time. If you suspect you have found spotted lanternfly in additional locations, please report it immediately to MDAR. If you are living or working in any of the areas mentioned above, please be vigilant and continue to report anything suspicious.

For those living or working in an area of Massachusetts where spotted lanternfly has become established, a management fact sheet is available here: https://ag.umass.edu/landscape/fact-sheets/spotted-lanternfly-management .

For the most current updates regarding where the spotted lanternfly has been reported in Massachusetts, visit: https://massnrc.org/pests/pestFAQsheets/spottedlanternfly.html .

For a map of known, established populations of spotted lanternfly, as well as detections of single, dead individuals outside of these areas (not indicating establishment), visit: https://nysipm.cornell.edu/environment/invasive-species-exotic-pests/spotted-lanternfly/ .

The Pennsylvania Department of Agriculture: