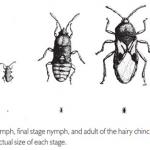 The chinch bug can be a major insect pest on lawns as well as parks, industrial parks, and cemeteries in Massachusetts. The hairy chinch bug (Blissus hirtus), the most common species in the Northeast, prefers ryegrass and fescues but will attack many other lawn grasses as well. Adult chinch bugs are about 1/5-inch long and black with white markings on the wings. Nymphs (immature stages) have the same general shape as the adult but lack wings and often have red or orange markings.

Chinch bugs spend the winter in the adult stage in partially protected areas (under shrubs or around foundations of houses). As the weather warms in the spring, adults move into open areas, where females begin laying eggs. There are usually two generations per year, with a partial third generation in unusually warm summers. There is a considerable overlap of generations, so all stages can be found at any time during the summer.

Examine the grass in the marginal areas of injured patches, not in the clearly dead grass. Spread the grass gently with your fingers and look in the thatch, near the soil surface. Chinch bugs are usually very active in the summer, so you will be able to see them scurrying around, especially on warm sunny days. You may also see them crawling on the foundations of nearby buildings.

An alternative method of detecting chinch bugs is to remove both ends of a large tin can, such as a coffee can. Soften the soil a little by pouring some water out of a watering can. Insert one end of the can into the ground at least two or three inches, leaving at least four inches above the ground. Fill the can with water from a garden hose (with moderate pressure) and wait about five minutes. If chinch bugs are present, they will float to the surface of the water, where you can count them. Note that the big-eyed bug, a common natural predator of chinch bugs, looks very similar (same size and shape, similar color) except that it has large, bulging eyes. If 50% or more of the "bugs" in the sample are big-eyed bugs, they may be able to effectively reduce the chinch bug population naturally.

In many instances, chemical control of chinch bugs is not necessary. Studies in Michigan have demonstrated that lawns that receive adequate amounts of water throughout the summer (preferably weekly deep watering) are better able to tolerate chinch bug populations without sustaining damage. In addition, many lawns have natural populations of predators, such as ground beetles or "big eyed bugs," which can keep chinch bug populations from getting out of hand. Insecticide applications sometimes have very adverse effects on these predators, so that chinch bug populations develop more rapidly in subsequent years.

The traditional approach to chemical application is to apply a material in early to mid-June, as the chinch bugs are beginning to move to their summer turf sites. If a population is unusually heavy, a second application should be made two to three weeks later. Normally, a chinch bug population can be controlled fairly well, for example, in July or August, by applying a material after a problem is noticed.

Some commercial lawn care companies are shifting toward a spring application, perhaps as early as April or early May, to destroy chinch bug populations before they have a chance to move to their summer sites. Most of the companies who have shifted to this approach have been satisfied with the level of control achieved. Note, however, that often the cool, wet conditions in the spring lead to considerable natural mortality of chinch bugs, so in some years early spring insecticide applications may be unnecessary.

In cool, wet springs a naturally occurring fungus, Beauvaria bassiana, is often able to attack chinch bugs enough to reduce starting populations substantially, so that summer treatments may not be necessary. If adequate rainfall occurs during the summer (0.5 to 1.0 inch per week) or if adequate irrigation is available, chinch bug activity often is masked. The insects may be present, but because the turf is able to grow vigorously, it can outgrow the insect damage. If a lawn has a particularly thick, dense thatch (more than one inch) and has a history of chinch bug activity, dethatching should help reduce chinch bug activity, at least for a year or two.

Endophytic grasses (certain cultivars of perennial ryegrass and fescues) appear to provide a substantial level of tolerance to chinch bug feeding and seem to be more drought tolerant in general than non-endophytic grasses. Any renovations of turf areas that have had a history of chinch bug activity should include at least some endophytic cultivars.

The "big-eyed bug," a true bug which looks just like a chinch bug but has large bulging eyes, often occurs in areas with infestations of chinch bugs. "Big-eyed bugs" are very aggresive predators of chinch bugs. They are sensitive to most turf insecticides, so insecticide applications may prove detrimental to this natural form of control.