This section of the web site features Management Updates written by the turf specialists of the UMass Extension Turf Program. The messages cover regional problems, are geared toward regional conditions, and are posted frequently during the growing season.

The most current message appears below; click into the archive to see messages from the current and previous growing seasons.

Join our free email list to receive notification whenever a new update is posted.

What is the first thing that comes to mind when you think of drug resistance? Superbugs? High lethality? Perhaps it’s time to add another characteristic such as endless? For decades, drug resistance has been widely reported in the medical, agricultural, and livestock industries. It seems that people are becoming numb to hearing about drug resistance, as when new variants of COVID-19 are continuously discovered. Successive new developments tend to register less effectively relative to those that came before.

Dollar spot, caused by the newly renamed ascomycete fungus Clarireedia jacksonii, is one of the most important diseases on turfgrass in New England. Fungicides are the main method for dollar spot disease management despite effective cultural practices being utilized. Due to the repeat application of fungicides, developed insensitivity and/or resistance, including multi-drug resistance (MDR) to four fungicide classes (benzimidazole, dicarboximide, demethylation inhibitor (DMI), and succinate dehydrogenase inhibitor (SDHI)) in dollar spot has occurred for more than 50 years. The multiple resistance makes it increasingly more difficult to control the disease and to maintain the performance expected of golf course turf.

A great example of resistance through mutations is the use of SDHI fungicides for dollar spot control. Different mutations have unique patterns of resistance to each of the various SDHI active ingredients including boscalid (EmeraldTM), fluxapyroxad (XzemplarTM), isofetamid (KabutoTM), fluopyram and pydiflumetofen (PosterityTM). Since 2017, our lab has identified many mutations involved in SDHI resistance in dollar spot from multiple different locations, each with their own patterns of resistance against different SDHI active ingredients. For example, all identified mutations are completely resistant to boscalid. However, certain mutations are resistant to all registered SDHI fungicides while other mutations have maintained high sensitivity to fluopyram.

In 2012, the active ingredient fluazinam was registered for use on turfgrass. Fluazinam is a protective fungicide that belongs to the 2,6-dinitroaniline chemical group (FRAC 29) and has been shown to be very effective against a variety of crop diseases including many turf pathogens. The biochemical mode of action is known to interrupt fungal cells’ energy production by an uncoupling of oxidative phosphorylation. Fluazinam is an exciting chemical because it is considered to have a low resistance risk. Since its introduction, there have been no official reports of dollar spot fluazinam resistance in the field. As a result, fluazinam has proven a useful tool for combating troublesome dollar spot populations with multiple resistance in New England. However, two reports of reduced efficacy of fluazinam in other crops have been observed, including resistance in Botrytis cinerea in Japanese bean fields (2000) and reduced sensitivity of two clonal lineages of Phytophthora infestans in various European countries (2018). In 2021, our lab noticed reduced in vitro sensitivity to fluazinam in some dollar spot populations. After replicating in vitro assays with a panel of dollar spot isolateswith varying sensitivities to different fungicide classes, we found a significant difference in fluazinam sensitivity between isolates collected recently (2017 to 2021) and those collected prior to 2017 (from 2006). To the best of our knowledge, this is the first discovery of reduced in vitro sensitivity to fluazinam in dollar spot.

Currently, we are preparing field experiments to investigate what these in vitro insensitivities mean under field conditions. The experiment will be carried out in the field to understand the efficacy of fluazinam at various rates/intervals using a collection of natural isolates, fluazinam-sensitive and -insensitive isolates, on inoculated plots. Simultaneously, we are conducting investigations to understand the genetic mechanisms of fluazinam insensitivity. Our lab offers a fee-based service to golf course superintendents and the turf industry with in vitro sensitivity assays to multiple classes of fungicides (DMI, SDHI, dicarboximide, benzimidazole, and fluazinam). We also provide a written report outlining specific recommendations for managing fungicide resistance tailored to specific golf course properties.

If you experience lack of control (e.g., shorter interval) using the above-mentioned fungicides, please consider submitting samples to the UMass Turf Pathology Lab. If you have any interest in this service or have questions regarding the assays in dollar spot, please contact Nolan Stamborski (nstamborski@umass.edu) or Dr. Geunhwa Jung (jung@umass.edu). 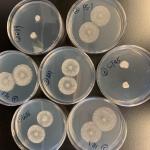