Aeration is the process of replacing soil air with air from the atmosphere and is important in sustaining sufficient soil oxygen for root growth and other growth related activities. A major contributor to poor aeration is soil compaction caused by vehicular and foot traffic. Soil compaction can create turf management problems caused by alterations in the physical properties of the soil including:

Turf cultivation practices are typically applied to the rootzone with the intent to limit surface disruption as much as possible. Cultivation methods available to turfgrass managers include coring (hollow tine, solid tine or shattercoring), slicing and spiking. However, these cultivation methods are not necessarily equal in their effectiveness to achieve important cultivation objectives such as thatch removal, alleviation of soil compaction, and preparations to enhance seed/soil contact for overseeding purposes (Table 1), while at the same time limiting surface disruption that can affect turf use and preemergence herbicide effectiveness (Table 2). Cultivation practices such as slicing and spiking, commonly used on golf courses, do not improve soil aeration to the same extent as do core cultivation practices, but are less disruptive to putting surfaces. Coring (especially hollow tine) is more disruptive to surface uniformity and requires a longer period for recovery. However, coring is the most effective method for improving aeration and alleviating compaction. A relatively new technology which uses short bursts of water injected under high pressure has been shown to provide reductions in compaction and improve aeration equal or superior to hollow tine core cultivation with less surface disruption.

Coring involves closed-hollow tines or open spoons that penetrate the soil and remove (and deposit) the soil core at the turf surface (see Figure 1). Core cultivation is the single most important management tool for controlling compaction. Other benefits of core aeration not listed in Table 1 include: 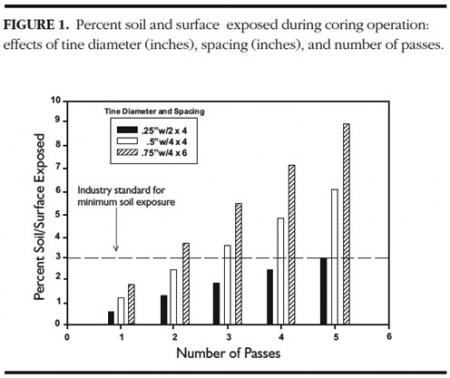