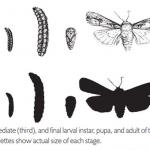 Cutworms can be destructive insects, particularly on golf courses and other highly maintained, closely-mown turf areas. Damage can occur any time from late May through the rest of the growing season. Cutworm damage can occur in well watered turf, and is most noticeable on turf which is being mowed at very low heights (less than 1/2 inch). Damage is usually most obvious in June through August, when temperatures are highest and cool season grasses are not growing vigorously.

There are several species of cutworms which attack turfgrass in New England. The adults are dull colored moths with a wingspan of one to two inches. The front wings have distinct scale patterns (faint lines, circles, and kidney-shaped spots) which can be used to identify species.

The black cutworm, which is the most common species in most of New England, has a band of dark brown scales in the midsection of the front wing and has a dagger shaped marking on the outer edge of a kidney shaped spot.

The caterpillars (the stage that actually damages turfgrass) are up to two inches long. Most species have a background color of dull gray or brown but usually have some stripes of brighter or sometimes darker colors. Black cutworms are normally dark gray or nearly black but may have a hint of green in the stripes. The lower half of the body is slightly lighter in color.

Caterpillars emerge from underground burrows at night and feed on turfgrass leaves near the burrows. Damaged spots look like unrepaired ball marks and can persist for several days.

Each cutworm species has its own life cycle, but many species that occur in New England cannot survive the local winters. Adults migrate south (to Maryland or the Carolinas) in the autumn and return on weather fronts in the spring. When the adults return, they begin to lay eggs, often singly, on the tips of grass blades. Tiny (1/32-inch long) caterpillars hatch out and begin to feed on the foliage. Caterpillars go through six or seven molts during their development. As they grow, they gradually move deeper into the thatch, carving "burrows" which they line with green excrement. Some large caterpillars stick their heads out of their burrows at night, chop off grass plants which are within reach, and pull the blades back into the burrow for subsequent dining. After feeding for two to four weeks, the caterpillars transform in the soil to pupae (cocoons), which are relatively smooth, torpedo-shaped, and brown.

In some parts of the country the black cutworm may complete as many as six generations per year. In New England the population often completes two or three generations in a "normal" year, but there is considerable overlap so a turf manager may be able to find any stage (adult, egg, caterpillar, or pupa) at any time during the growing season.

Cutworms feed on several kinds of grasses. They seem to be most apparent in turf areas maintained at very low (less than 1/2-inch) mowing heights. Cutworm damage on turf looks like small pock marks (or ball marks on a putting green). Closer examination reveals a small burrow and several grass plants around the perimeter of the burrow which have been sheared off near ground level. Often these burrows are lined with green, pellet-like matter. This is caterpillar "frass," or excrement.

Cutworm moths and caterpillars are nocturnal (active at night) so normal daytime inspections will not unveil the insects. The easiest way to determine whether cutworm caterpillars are present in a turf setting is to conduct an irritating drench or soapy flush. This is done by putting one or two tablespoons of lemon-scented dish detergent in one or two gallons of water and pouring the soapy solution over an area which is about two feet on each side. The caterpillars will be irritated by the solution and will wriggle out of the thatch and up to the surface, where they can be counted. Most caterpillars will respond to the soapy solution within two to five minutes. This technique is particularly helpful for determining what stages (sizes) of caterpillars are present. Do not sample on putting greens or other closely mown turf at midday in the summer; the soapy solution may damage the turfgrass.

Visual inspection can give an indication of the presence of caterpillars. Take a close look at suspicious looking pock marks, and look for sheared grass plants on the perimeter. A rough estimate of the number of damage spots (number of spots per square foot) is helpful when comparing one area to another. Or make a small open frame, perhaps one foot on each side, and toss it randomly in the general area where cutworms are present. Count and record the number of damage marks inside the frame.

Black light traps attract adult moths very effectively. Use the traps to determine when the adults first begin to fly and when those flights peak in terms of number of moths.

Cutworms are relatively susceptible to several turf insecticides, as well as some biological control agents. The key to successful control is to apply a control agent (whether it is a biological control agent or a traditional insecticide) when most of the caterpillars are still very small (around 1/4-inch) if possible. Because cutworms are nocturnal, traditional insecticide applications should be made as late in the day as possible. This will ensure that the insecticide is as "fresh" as possible when the caterpillars leave their burrows in the evening and begin foraging on the surface. The material should be watered in lightly, just enough to move the insecticide off the blades and into the upper thatch. If possible, the area should not be mowed for one or two days after application.

Recent studies conducted on creeping bentgrass indicate that some cutworm eggs are removed during the mowing process, but those eggs often survive and hatch from the "compost pile." The small caterpillars then begin to migrate back to the putting greens, where their feeding damage is most apparent. Current recommendations include applying an insecticide around the perimeter of putting greens that have had a history of cutworm damage. Some researchers recommend a border treatment of up to 30 ft. beyond the green. Migrating caterpillars should be killed before they reach the green.

One guideline for timing of application is to make an application two or three weeks after a peak in moth flight activity. This allows time for the moths to lay eggs and for the eggs to hatch into small caterpillars, which are the most vulnerable stage.

There are several biological control options which appear to work reasonably well for controlling cutworms in turfgrass, as long as the biological control agent is handled properly and applied with adequate water and irrigation. Bacillus thuringiensis var. kurstaki, available in a variety of commercial formulations, is a bacterium which produces a toxin and paralyzes the gut of the caterpillar. The bacterium will not kill the caterpillars quickly, but it does cause the caterpillars to stop feeding, so damage should not continue to spread after application.

An entomopathogenic nematode, Steinernema carpocapsae, is able to seek out caterpillars and penetrate the host, where it introduces a different bacterium. This bacterium causes a massive infection in the host caterpillar. The nematode then reproduces inside the insect cadaver and moves on in search of new potential targets. Field trials in Ohio, New Hampshire, and other places indicate that this nematode can reduce caterpillar populations substantially. However, the nematode is very sensitive to desiccation, so applications should not be made at mid-day and should be watered in (at least half an inch if possible) immediately after application.

Some perennial ryegrasses and fescues contain endophytes, which are fungi that grow inside the grass plant. While endophytic ryegrass and fescue cultivars are toxic to webworms, apparently they are not detrimental to cutworms.