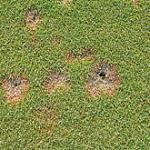 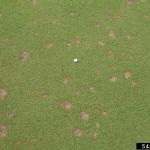 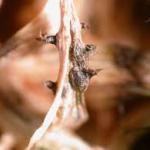 Dead Spot, caused by the fungus Ophiosphaerella agrostis (AKA O. agrostidis), is a disease of young stands of bentgrass and Bermuda grass that occurs most frequently in high sand content areas.  It has not been observed in native soils.  Dead spot is most severe in turf grown in full sun, areas prone to summer stress, and low-cut greens. It is less severe in higher-cut collars and tees. Dead spot generally occurs within 1-6 years of seeding or sprigging a new green and on greens that have been fumigated with soil sterilants. Initial symptoms consist of small, reddish brown spots which resemble ballmarks. These spots remain small (less than 3.5" in diameter) and may be sunken, giving the green a pitted appearance. As the disease progresses, spot centers turn tan with reddish brown margins. Roots and crowns of affected plants are dark and necrotic. The spots can be slow to recover as stolon growth into affected areas is inhibited. The disease typically begins to disappear on its own within 4 years.

O. agrostis survives the winter in crowns, stolons, and roots as fruiting bodies called pseudothecia. Pseudothecia are abundant in summer and distinctive in appearance. The fungus becomes active when temperatures reach 68ºF (20ºC) for several days and attacks all turfgrass tissues. In bentgrasses, the disease may be active from May-December, but it is most active in hot, dry weather. The optimum temperature for the pathogen is higher than temperatures favorable for the growth of cool season turfgrasses. It is important to achieve complete recovery of the spots before winter.

An appropriate fungicide mixed with a low rate of nitrogen arrests disease development and speeds recovery. Weekly fungicide applications may be required until full recovery is achieved. Control of this disease with fungicides is often not consistent; however fungicides may improve turf survival enough to allow regrowth into affected spots.