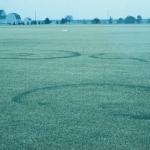 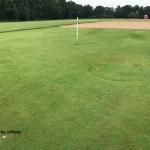 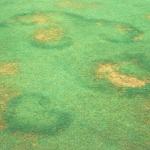 Fairy ring is the common term used to describe circles of mushrooms, green circular bands of turf, or rings and arcs of dead plants in a turfgrass stand. Fairy ring symptoms may be caused by numerous species of soil and thatch inhabiting fungi of the Basidiomycetes class. Many of these fungi produce mushrooms or puffballs (basidiocarps). They reside in the thatch or other sources of organic matter such as dead tree roots. Fairy ring fungi grow radially outward from their point of initiation and release nitrogen from the degradation of thatch or other organic matter. These fungi do not directly parasitize turfgrasses, but can alter the soil environment in ways that affect turf health and physiology. They may produce a dense network of mycelia which repels water, making the soil hydrophobic (water repelling) and causing localized dry spot. Symptoms are most often observed in hot, dry weather, especially in nutrient deficient turf. Basidiocarps appear following heavy rain or irrigation.

Three types of Fairy ring have been described based upon symptoms:

Fairy ring symptoms have been treated with a combination of cultural practices and chemical applications (fungicides, wetting agents) in various configurations; consistent and reliable control has not been achieved.

Applications of fungicides or wetting agents produce limited and inconsistent results.  Numerous species of fungi produce fairy rings, and some are not sensitive to registered fungicides. In addition, the fungi often originate from deep in the soil where fungicides cannot reach.  Success requires that the fungicides and/or wetting agents be well distributed throughout the soil by a combination of thorough irrigation and physical disruption of the soil surface.