The goal of any turf establishment project is to provide rapid cover to reduce the potential for soil compaction and erosion, and to produce a mature turf as quickly as possible, in order to make the site functional and increase the chances of long term success.

In the Northeast, there is a target period during the late summer that is typically ideal for renovation and establishment. The timing and length of this period can be influenced by many factors including rainfall amounts, air temperatures and soil temperatures. The optimal window on average tends to occur from approximately the third week of August until about the third week of September for most areas of Massachusetts (warmer areas such as the Cape, the islands, and coastal southeastern MA can often stretch it out a little longer).

The often difficult reality is that after the autumnal equinox, establishment projects become less of a sure thing and more of a gamble with each passing day. When the calendar flips from September to October, “is it too late to plant grass?” becomes a common question and a frequent topic of discussion and debate.

Aside from decreasing temperatures, there are two other factors at play during the fall that work against your goal of an effective establishment project. The first is decreasing daylength, which reduces the amount of sunlight that is available to the developing plants every day. This is exacerbated by the fact that the sun is also taking an increasingly lower track across the sky, which can increase shading of the turf. Less sunlight translates to lower photosynthesis, which means less resources for growth, development, and eventual winter hardening.

The best timing for planting is also heavily impacted by the grasses that that are selected for a project. This is because turfgrass species vary significantly in terms of the inherent rate at which they are able to progress from the time of planting to a turf stand of acceptable cover and density and, in the case of fall planting, a level of maturity sufficient to survive the winter. This characteristic is referred to as the establishment rate. All else equal, a general breakdown of relative establishment rates among key cool-season grass species is as follows: 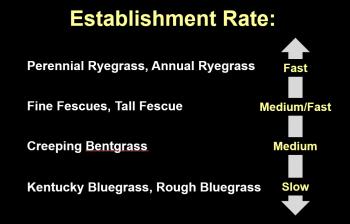 Notable here is that Kentucky bluegrass is among the slowest to establish relative to comparable cool season grasses. As one of our most valuable turfgrasses, Kentucky bluegrass comprises a sizeable percentage of many seed mixtures commonly utilized for lawns, grounds and athletic fields. This means that for projects utilizing Kentucky bluegrass seed, planting as early in the window as possible is especially important for a successful outcome.

Bear in mind that adjustments in species selection in an attempt to make up for less than ideal timing are not recommended. Selection decisions should always be based on factors such as the growing environment at the site, the use of the turf, and the management plan. Because timing is a paramount consideration for establishment projects, seeding earlier is especially critical for grasses that are slow to establish.

Research has shown that less cover and density going into winter can be typically be expected with each passing week that seeding is delayed in late summer/early fall. Eventually a tipping point is reached after which project failure is likely, and that tipping point comes sooner with slower-establishing grasses.

The most prudent approach for most areas of Massachusetts is to avoid cultivating the soil to undertake new establishment from seed after the end of September when at all possible. The key concern is opening up too much soil that may be challenging to adequately cover with grass prior to winter.

There is typically some leeway into October for less disruptive efforts such as overseeding into existing turf (especially slice seeding) and smaller scale repairs. For the reasons discussed above, diminishing returns can be expected from even these maintenance practices as the fall progresses. When in doubt, if the budget can absorb the cost of the seed and labor, late overseeding won’t do any harm, and it is very possible to come out ahead of the game, especially if milder weather persists.

Unfortunately, reality often doesn’t follow the calendar. When starting with bare soil late in the season (as with new construction, for example) it is almost always better to do something than to do nothing, at the very least to provide effective erosion control. Soil loss negatively impacts the seedbed and root zone, can be costly and time consuming to repair and replace, and can carry nutrients and other materials off site leading to possible environmental problems.

Mulch is a key ingredient for late season projects, and planting from seed will benefit from the use of mulches such as clean, loose straw or straw netting. Mulches will provide a level of insulation and moisture retention, and will help to hold the soil during the longer establishment period.

Dark mulch materials can provide a warming and thus season-extending effect under certain conditions. However dark mulches are often useful only in specialized circumstances because the young turf is initially less stress tolerant, which is unfavorable heading into winter.

If seeding is ruled out entirely for an open site late in the season, it is still prudent to mulch bare soil with netting or wood chips for winter protection until planting can be attempted in the spring.

Sod, regardless of species composition,can be successfully installed on high-value sites as long soil is not frozen and soil temperatures are conducive to rooting (above approximately 50 degrees), making sod an excellent choice for late season establishment projects under a range of circumstances. Sod installations, however, carry a high cost relative to other establishment methods.

Hydroseeding can also be considered and is frequently a viable choice for late-season establishment projects. Even in instances where germination and/or establishment are poor, the hydroseeding mulch is typically useful in holding the soil and reducing erosion until remedial steps can be taken. Remember to avoid slower establishing bluegrasses later in the season and opt for quicker options such as perennial ryegrass instead.

Dormant seeding is the planting of seed into a prepared seedbed after conditions conducive to germination have ceased for the season, with the hope that the seed will lie dormant over the winter and germinate as soon as conditions become favorable in the spring. When late summer seeding is not an option, available research suggests dormant seeding may or may not be as effective as waiting for early spring seeding, depending on a host of factors.

With dormant seeding there are many variables over which there is no control that can easily sink a project. The primary risk is a warm spell during the winter or early spring that initiates germination of seedlings which are subsequently killed if bitter cold returns. For this reason, dormant seeding often actually works better for slower-establishing species such as Kentucky bluegrass, and less well for faster species like perennial ryegrass. A winter with little snow cover can also cause seeds to dry out, greatly reducing germination percentage.

Unless absolutely necessary, we normally advise that dormant seeding be done only with the goal of encouraging greater density or filling in bare areas, as opposed to establishment of new areas of turf. If the weather outlook seems favorable and the time and cost involved isn't an issue, however, then dormant seeding is certainly worth a shot. If the stars align it is possible to get a great jump start in the spring. At that same time, dormant seeding has a high degree of risk and necessitates a good contingency plan for the event of project failure.

Dormant sodding is another approach similar to dormant seeding, involving the laying of sod on a prepared site after soil temperatures drop below levels at which rooting can occur. In a perfect scenario the sod lays dormant over the winter and roots down when soils begin to warm in the spring. While dormant sodding is possible and regularly successful in New England with proper care, many of the same risks common to dormant seeding are in play. These risks normally confine dormant sodding to higher budget projects that have the capacity to absorb the costs of project failure.

Mowing after planting of new seed is a critical step in the establishment process. Mowing stimulates the plants to form new tillers, which is a primary driver of turf density. When dealing with the planting of new turf, the best way to time the first mowing is to use the '1/3 rule' as a guide.

The 1/3 rule states that no more than 1/3 of the total leaf area should be removed by a single mowing event. Accordingly, an appropriate mowing height should be determined in advance, and the turf should be cut when it reaches a height around the 1/3 rule threshold. For example, if the desired mowing height is 2", then the turf should receive a first cut when it reaches 3" tall. The 1/3 rule will dictate the mowing frequency thereafter as well. The only exception may be with the final mowing, as it is often beneficial to reduce cutting height slightly for the last mowing event before winter.

Also, be sure to remove fallen leaves promptly and gently from establishing areas in the fall to avoid light exclusion problems. As noted above, establishing turf benefits from receiving as much light as possible as the days grow shorter. Additionally, since prolonged leaf cover can sometimes create conditions conducive to snow mold during the cool, wet weather of fall, leaf removal is beneficial from a disease perspective as well.

With the right equipment, mulching of leaves into the turf is often a possibility. The chopped leaf tissue serves to contribute a little nutrition and some organic matter into the system. Care must be taken to not overdo it, however, too much leaf tissue too fast can overwhelm the ability of microorganisms to break the tissue down.