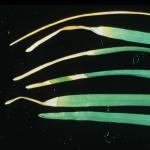 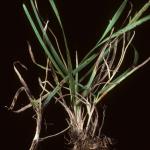 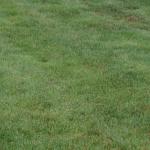 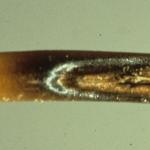 The "leaf spot" diseases are widespread on cool and warm-season turfgrasses and are caused by many different genera of fungi. Many of these diseases are minor in impact while others are capable of causing major destruction; only the most important pathogens will be covered here.

Bipolaris sorokiniana affects all turfgrass species in the warm, wet summer months. Symptoms appear as small dark purple to black spots on leaf blades which enlarge with centers fading to tan, often with a yellow halo. The disease is confined to leaf blades in early stages, but sheaths, roots, and crowns can become infected during hot, humid weather. Leaf spots may coalesce causing large, necrotic areas and a general thinning of the turf. B. sorokiniana overwinters as dormant mycelium or conidia in infected plant tissues, thatch, and in plant debris. B. sorokiniana is favored by warm, wet weather and disease severity increases with rising temperatures. A period of drought stress followed by rewetting also encourages the pathogen. The life cycle and epidemiology of Bipolaris are similar to those of Drechslera poae.

Drechslera poae was once a very important disease of Kentucky bluegrass. It has become far less common in recent years due to the availability of resistant cultivars; however, it may still be seen on golf courses and lawns where older KBG cultivars persist. The disease occurs in the cool, moist weather of spring as black to purple spots on the leaf blade. Older leaves are more susceptible to infection and lesions can encircle the entire leaf blade causing girdling and the death of individual blades or tillers. Eventually, the fungus invades leaf sheaths, crowns, and roots causing the "melting-out" phase of the disease.The turf thins, turns yellow to blackish brown, and roots, rhizomes, and crowns exhibit a reddish brown, dry rot. When the weather turns warmer and drier, the surviving turf will begin to recover and fill in. D. poae survives unfavorable periods as dormant mycelium in infected leaf tissue, thatch, and plant debris. When environmental conditions are conducive, the fungus sporulates profusely and can be spread by wind, rain, irrigation water, equipment, and people. Conidia may be produced at a wide range of temperatures, but 58-64°F (14-18°C) is the optimum. The pathogen is favored by extended periods of leaf wetness, cool, overcast or foggy days, poor air circulation, low light intensity, high nitrogen levels, and excessive thatch and leaf clippings.

Red Leaf Spot caused by Drechslera erythrospila is a disease of bentgrasses. Symptoms are small reddish brown, oval lesions which coalese, resulting in an overall reddish cast to affected turf. The disease occurs in randomly distributed, irregularly shaped patches. Individual blades are often girdled and die giving the appearance of drought stress. The disease is favored by warm, wet weather and its epidemiology is similar to D. poae.

Other minor leaf spots are caused by species of Ascochyta, Curvularia, and Leptosphaerulinia trifolii. These pathogens are weakly virulent and often invade weakened or senescing tissues or occur as components of a disease complex. Their presence is typically indicative of turf stress and improved cultural practices are frequently sufficient for treatment.