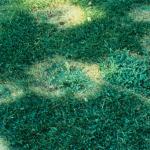 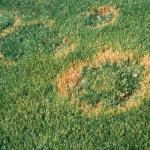 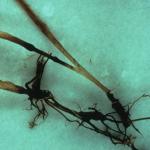 The fungus Ophiosphaerella korrae causes necrotic ring spot disease of bluegrasses (Poa species) and creeping red fescue (Festuca rubra). O. korrae is active in the cool, wet periods of spring and fall. Symptoms of disease appear at this time, as infection of the root system impairs the turf's ability to take up water. The first symptoms are small (2-4 in), light green spots which enlarge into patches that can range from 1 to 3 feet in diameter. The turf in infected patches turns reddish brown to bronze and eventually fades to a light straw color. All of the plants in an infected area may die leaving a sunken depression, but more often plants survive and recolonize infection centers resulting in a ring-like or "frog-eye" appearance. Symptoms can sometimes occur as a diffuse yellowing or browning that coalesces into large areas of blighted turf. Neither leaf spots nor aerial mycelium is seen in cases of necrotic ring spot. The disease is characterized by a blackening of roots and rhizomes and dark brown, ectotrophic hyphae on affected roots, rhizomes, and crowns. Roots and crowns may become extensively rotted.

O. korrae survives as mycelium in infected plant debris. The pathogen grows along the surface of host roots and rhizomes and when conditions favor disease development, infection hyphae penetrate to interior portions of the roots. Ascospores (sexual spores) are produced in dark, conical fruiting bodies called pseudothecia. The optimal temperature range for fungal growth is 60-75°F (15-24°C). While the growth of O. korrae is favored by cool, wet conditions, summer heat and drought stress intensify symptom expression. The disease can appear over a wide range of pH, is most severe in compacted soils, and most prevalent on 2-4 year old stands that were established with sod. Left untreated, it typically declines in severity after several years due to the build-up of antagonistic microflora.

Begin preventative fungicide applications in spring when the soil temperature at 3" reaches the range of 60-70°F (15-21°C). Systemic fungicides must be watered in before they dry on the foliage to be effective against necrotic ring spot.  Best results are obtained when the turf is irrigated prior to and after application. On lawns, fungicide applications should be made only if all other control measures have been unsuccessful.