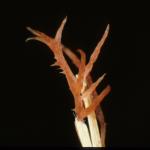 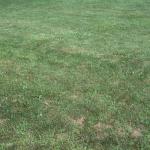 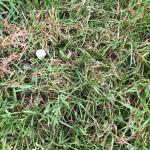 Red thread is caused by the fungus Laetisaria fuciformis. Pink patch, caused by Limonomyces roseipellis, is a different disease which closely resembles red thread. Pink patch was once considered to be a form of red thread due to similarities in symptoms, disease cycle, epidemiology, host range, and appearance. While the two diseases sometimes occur together, pink patch is uncommon in the Northeast. Both diseases occur on turf that is growing slowly because of low fertility, lack of sunlight, drought, or other sources of stress.

Symptoms of pink patch and red thread appear as roughly circular, pinkish red to tan patches, 2-4 inches in diameter. The red thread pathogen produces a red or dark pink stroma (a structure consisting of fungal mycelium and plant tissue) which can be seen with the naked eye on infected leaves. A mix of healthy and diseased grass blades gives the turf a ragged appearance. In dry conditions, the stroma become brittle, are easily broken and detached, and may be spread by equipment or fall into the thatch where they remain viable for up to two years. Under wet conditions, pink, cottony tufts of mycelium and conidia (spores) may be produced.

Pink patch spreads much more slowly than red thread, is less severe, and does not produce cottony tufts of mycelium. Grass blades are covered with a pink, gelatinous mycelium which can survive for long periods in plant debris.

Red thread survives unfavorable periods as desiccated stroma, or in infected plant material. Reproductive structures are spread by water, wind, equipment, and people. The fungus requires a film of moisture on leaves for germination and infection. The pathogen enters grass blades through stomata or through wounds. Red thread is seen in the cooler weather of spring and fall, when the turf is still growing slowly. The fungus is capable of growth over a wide range of temperatures, but the optimum range is 60-75°F. Over 75°F, the growth rate of the fungus decreases significantly, and it ceases at 85°F. Pink patch survives as mycelium in plant debris and is also capable of growth at a wide range of temperatures.

All species of turf are susceptible to red thread, though perennial rye and fescues are the most susceptible. Red thread and pink patch are favored by cool temperatures, frequent rain or irrigation, and high humidity. Both pathogens are limited to the plant foliage and individual blades die from the tips down. Neither pathogen will kill turf crowns or roots, but severe, recurrent infections may eventually weaken turf health. Healthy turf will recover quickly when it enters a period of vigorous growth.