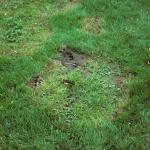 Take-all patch is caused by the fungus Gaeumannomyces graminis. It occurs on all species of bentgrass in temperate climates throughout the world. It is most severe on newly established creeping bentgrass stands, and is rarely seen on undisturbed turf greater than ten years old. Symptoms appear in late spring or early summer as small, circular, light brown to reddish brown patches. These patches are typically 8-24 inches in diameter but may be as large as 3 feet across. Symptoms are most likely to appear in areas under the greatest cultural and/or environmental stress. Patches may coalesce into large areas of dead or dying turf and the affected areas heal slowly. The centers of patches are often invaded by weeds, fescues, or bluegrass species, producing a "frog-eye" appearance similar to summer patch. The roots, rhizomes, stolons, and crowns turn dark brown to black with dark ectotrophic hyphae on the surface of the roots. Although patches usually stop expanding during the summer, symptoms may intensify with the onset of summer stress, with bronzed turf fading to a dull tan/brown. Fruiting bodies (perithecia) of the pathogen develop beneath the leaf sheaths around crowns in late spring or autumn. Affected areas may appear gray in the winter. Symptoms may reappear in successive years, but in most cases take-all patch naturally declines in severity after several years, presumably because of the activity of antagonistic microflora.

Gaeumannomyces graminis is a natural soil inhabitant, existing as a saprophyte and causing disease only under specific conditions. It survives as mycelium in infected plant debris and organic matter.  Active infection of bentgrass occurs in autumn and spring when temperatures reach 55-65°F (12-18°C). Initially, the fungus colonizes the surface of the roots, but under favorable conditions (cool, moist weather) root interiors are infected and extensive colonization occurs. Take-all patch is most severe in sites with a high sand content, recently fumigated soils, and in turf under stress. The pathogen is favored by low fertility, high pH, manganese deficiency, and cool, wet weather followed by hot, dry conditions.