Voles (also known as meadow voles, or meadow mice) are rodents that are exceedingly common in the New England landscape. They are especially prevalent on properties located in proximity to suitable cover, such as those adjacent to brushy, wooded or tall grass areas. Two or three different vole species may occur in an area at any given time.

The appearance of various vole species resembles that of mice, although voles tend to have longer fur and shorter tails. Their color varies from grey to chestnut brown depending upon species, level of maturity and the time of year. According to the Massachusetts Audubon Society, prime vole habitat can support upwards of 300 voles per acre. As such, voles are prolific, reaching sexual maturity quickly and gestation periods are short. A single, healthy female vole can give birth to several litters per year.

Voles are herbivorous, meaning that they feed on plants and related materials such as tubers and seeds. Voles have three chief priorities: to reproduce, to consume vast amounts of plant material, and to avoid being consumed by an array of predators including hawks, owls, foxes, coyotes, raccoons, and house cats. Thus, voles are stealthy and seldom seen. They seek shelter and protection in burrows in the ground, mulch, tall grass areas, brush piles, wood piles, beneath rocks, upturned flower pots, etc.

Voles are frequently confused with another common landscape pest, moles. These two species are in fact completely unrelated. Moles spend nearly all of their time beneath the surface of the soil, excavating and navigating a network of tunnels which can be very disruptive to the turf surface. Aside from time spent in underground burrows, voles accomplish much of their scavenging and feeding above ground. Voles eat plants as noted above, while carnivorous moles ignore plants and seek out protein sources such as insects, worms and grubs.

Voles in the Landscape

Voles are often implicated in damage to young trees and woody ornamentals. Chewing by voles at the base of unprotected stems can cause girdling and result in significant dieback and even plant death. In gardens, voles have been observed to gnaw on roots and crowns causing damage to plants such as parsley and celery. As turf pests are concerned, voles are among the vertebrate pests most likely to cause turf damage. Notable damage to turf most commonly occurs during the winter season under snow.

Winters with lasting snow cover provide relative protection from predators, and voles enjoy the freedom to construct elaborate and frequently-used 'runway' systems within the turf canopy. Daily vole activity normally consists of many short forays from the nest to seek food along these runways. 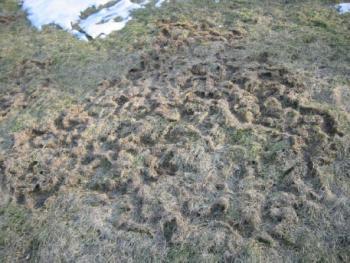 Damage from vole 'runways', as pictured, is an un-welcome sight as snow melts in the spring.

Turf damage is primarily caused by feeding, in which the voles chew the plants down to the crown (growing point) at ground level. Additional damage is caused by wear from vole 'traffic', and also from the accumulation of vole excrement along the runways. Folks are often blissfully unaware of the activity occurring beneath the snow, until damage becomes apparent upon snow melt in March or April.

When the snow recedes and the turf first becomes visible in the spring, vole damage can appear dramatic, especially when coupled with other issues such as low temperature injury or snow mold. As noted above, however, voles feed only on turfgrass shoots and the vital crown tissue and root system are typically not disturbed. Very often, grass plants will re-grow in the damaged areas as the weather warms. Practices that can encourage rapid recovery include thorough raking (especially to remove accumulated excrement) and a light application of fertilizer. For extra insurance or repair of areas that do not recover acceptably, overseed with a compatible mix of grasses.

Due to the sheer number of voles present in many areas, chemical or trapping approaches can be prohibitively labor intensive and are often futile. For these reasons and the fact that any vole damage to turf is normally short-lived, such methods are rarely indicated for residential lawns.

Chemical baits are available, but must be used with caution due to potential toxicity to certain birds and other small mammals such as chipmunks and squirrels. Traditional mouse 'snap traps' baited with items such as peanut butter and placed at right angles to runways can be effective at catching some voles (along other 'non-target' critters), but do not often serve to reduce population numbers significantly.

Additional practices that can help to reduce the potential for vole damage include:

An open winter without lasting snow is an excellent avenue of free vole control, as vole activity on exposed lawn areas will be greatly reduced without the comparative protection provided by the snow.