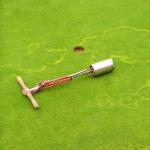 A new disease of annual bluegrass greens was first noticed in 2004 and 2005. The disease strongly resembled yellow patch (Rhizoctonia cerealis); however, yellow patch typically occurs between 50-65°F, while the new disease appeared between 60-95°F. Outbreaks occurred in both cool and hot weather, always on annual bluegrass, and a Rhizoctonia-like fungus was consistently isolated from affected turf. Molecular investigation of the pathogen's genome identified it as Waitea circinata var. circinata, a "new" Rhizoctonia species. The disease has had several names since it was first observed, but currently is known as Waitea patch or brown ring patch.

Symptoms of the disease first appear as yellow rings ranging from a few inches to a foot in diameter, which turn light brown to reddish brown as the disease progresses. The turfgrass is slow to recover. In 2006 and 2007, disease symptoms appeared throughout New England and New York in the spring and early summer. The pathogen has since been confirmed on rough bluegrass (Poa trivialis) and creeping bentgrass. It does not appear to affect perennial ryegrass, fescues, or Kentucky bluegrass.

Brown ring patch is similar to diseases caused by other Rhizoctonia species, but appears to infect upper roots, crowns, and stems as well as foliage of individual plants. It also degrades thatch, giving rise to sunken rings, and acts somewhat like superficial fairy ring. Brown ring patch is limited to putting greens. Height of cut seems to play a significant role in turf susceptibility to the disease and symptoms are far less severe on higher-cut turf.  Cultural conditions associated with brown ring patch include low nitrogen fertility and excessive thatch accumulation. Moist weather, fog and overcast conditions promote disease development, although the role of rainfall is not well understood. Infection can occur at a broad range of temperatures; however, maximum growth occurs at 77°-86°F (25°-30°C).

Most fungicides labeled for control of Rhizoctonia are active against brown ring patch, with the exception of thiophanate-methyl (Cleary's 3336TM), but their curative activity is much less than their preventive activity. Tank mixes or pre-mixtures of active ingredients may be more effective than applications of a single fungicide. Applications should be made preventively where there is a history of the disease.