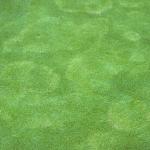 Yellow patch (AKA cool-season brown patch), caused by Rhizoctonia cerealis, affects mostly cool season grasses and causes yellow rings, arcs, or patches on closely mowed (≤1”) turf. Patches are typically 6-12 inches in diameter but may be as large as 3 feet across. The main hosts are bentgrasses, bluegrasses, and ryegrasses, but the disease has been reported on bermudagrasses and Zoysia species. Rings may be uniformly distributed but may also coalesce. The disease is mostly a foliar blight and the damage cosmetic. Yellow patch is favored by extended periods of overcast, rainy, cool weather, shade, poorly drained soil, excess thatch, and poor air circulation. Symptoms typically appear when temperatures are in the range of 50-65° F (10-18°C). Dense, highly fertilized, and frequently watered turf is most susceptible to infection.

Rhizoctonia zeae and R. oryzae cause leaf and sheath spot of bentgrass, centipedegrass, and St. Augustinegrass. Symptoms generally occur when temperatures are in the mid-80s F (28-30°C). Leaf spots are typically irregular with tan centers and dark borders, similar to those observed in brown patch. Affected patches may be tan or orange to brown, sometimes with a smoke ring effect. Symptoms may vary with turfgrass species and cultivar, the Rhizoctonia species or strain, soil conditions, and environmental conditions.

Practices that can reduce disease incidence include:

Yellow patch that appears in spring generally does not require fungicide applications as the turfgrass recovers with warmer temperatures and sunny weather. Symptoms occurring in fall may be more persistent. Fungicide efficacy may vary among Rhizoctonia species.

For a listing of fungicides currently labeled to manage these diseases, refer to the Disease Management chapter of UMass Extension's Professional Guide for IPM in Turf for Massachusetts.