Annual bluegrass weevil (ABW) larvae are emerging from many locations throughout southern New England. One of our sites just east of Springfield had a high population (in an untreated area) a week ago that was predominantly second and third instars. The same site shows a similar distribution this week, with a few fourth instars showing up as well. Rhododendrons started to bloom near the end of last week (just before Memorial Day), and are in full bloom now. So even though the weather remains cool and cloudy, this would be a good time for many of you to make your applications targeting larvae if you have not already done so. Options include cyantraniliprole, indoxacarb, spinosad, or trichlorfon. 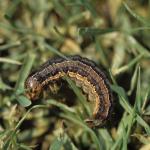 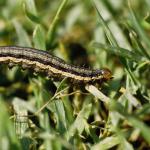 One of the listservs to which I subscribe included an alert last Thursday (25 May) that armyworms were present in large numbers in areas of northern and eastern New York, particularly in grass pastures. The report indicated that the caterpillars were mostly third to sixth instars at that time. (Of course New York is a large state, and the report did not specify more precisely where the caterpillars were found.)

While it has been about 15 years since we last saw an outbreak of armyworms in turf in New England, it is always wise to be vigilant. If the weather turns warmer and drier in the next week or so, the possibility certainly exists that large numbers of adult moths could emerge from their sites in New York and be blown passively on weather fronts to locations in New England.

For those of you who do not remember the last infestation, armyworms can appear in huge numbers - as many as 80 to 100 per square foot, crawling on the surface of the turf. They can cause significant damage to fine turf, as well as pastures and other crops.

Please stay alert - and let me know if you see any armyworms! The body of the caterpillar is generally described as black or dark navy blue, and there are two tan stripes along each side of the body. The head is a dark brown with light brown splotches. The prolegs (the fleshy legs on the abdomen) have a black stripe near the base of the leg.