Atlas Farm, owned and operated by Gideon Porth is located in South Deerfield, MA.  Gideon grows wide variety of certified organic vegetables, herbs, and flowers, with many gourmet, heirloom and specialty varieties in addition to all the standard varieties. Gideon has been working in agriculture since 1996 and has deep commitment to sustainable farming.
Atlas farm is dedicated to producing food in a way that will maintain biological diversity, support natural ecosystems, and keep the land productive for future generations.  One of their major goals is to minimize the impact of the farm on the surrounding ecosystem. For these reasons, they add fertility to their fields by cover cropping and using organic, naturally occurring fertilizers; manage pests by crop rotation and cultivar selection, and use organic pesticides only as a last resort. They strive to be efficient in their use of fossil fuels and are constantly trying new approaches to farming to become less wasteful.

This commitment to environmental stewardship is part of what led Gideon to take part in the UMass Extension project, 'Building Model Networks to Use Shelled Corn for Greenhouse Heat Corn '.  Insulating himself from the recent volatility in fossil fuel prices was another motivating factor.

In 2008 Gideon built a new 35'x144' gothic style ridge vent greenhouse with 6mm double poly glazing.  This house is primarily used for greenhouse tomatoes and maintains a night temperature of 62 degrees.  There are six HAF fans in two rows of three for air mixing.

To provide heat to his tomatoes Gideon purchased an LDJ corn fired 165,000 btu Amaizeing Heat boiler.
The corn boiler serves two purposes.  One is to run a root zone radiant heating system in his tomato troughs.  The troughs are 132' long by 2' wide with one loop of heat tubing in each.  He keeps the root zone of the tomatoes at 70 degrees, or maybe a little less when it's cloudy and cool and the plants aren't growing as fast.  To reach this temperature he keeps the 250 gallons of water in the storage tank at 140 degrees, and has plumbed the system so that the 140 degree water coming from the tank is mixed with cooler return water so that the water in the heating tubes at the root zone is 90 degrees.  The water to air heat exchanger also uses hot water from the boiler to help keep the greenhouse air temps at 62 degrees.  There is a 225,000btu propane burner in the house for backup and to assist the corn boiler, but it's been used very little this season.  The boiler uses a domestic hot water coil to heat the water for the radiant tubes in the planting troughs, and requires a heated return in the primary loop, so between the radiant heat, the heat exchanger, and the need for a heated return the plumbing gets a bit complicated.

The burner was purchased from Yellow's Green, a local dealer in Fitchburg, MA for about $6000.  This included the boiler, a standard hopper, and freight.  He paid an additional $800 for a 165,000 btu water to air heat exchanger, $400 for a 250 gallon storage tank for the heated water, and $150 in tubing – Gideon used 3/4” black poly pipe for his heating tubes, which seems to work fine.  Plumbing parts and labor ran an additional $3,000.
Daily use:
Use of the greenhouse typically starts at the beginning of March and runs right through summer and into September.  The tomatoes are grown in a compost mix in trenches on the floor.  Gideon has also been experimenting with winter production of herbs and greens.

2009 was the first year of use for the corn boiler with the propane backup system.  In 2009 corn cost $180/ton and propane cost $2/gal. Gideon was able to heat with majority corn, although he did still need to burn 500 gallons of propane. Gideon was able to replace 1414.29 gallons of propane with corn for a net savings of $2,828.57. Also, since the total carbon output from producing and burning corn is lower than the total carbon output of producing and burning propane, Gideon was able to reduce carbon emissions by 17,211.86lbs.
At Gideon’s average rate of dollars saved on fuel per year, it will take 3.3 years for the boiler and installation to pay for itself. See the accompanying table for a full analysis. 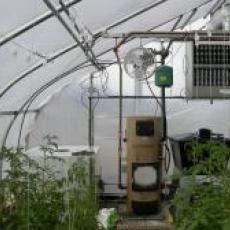 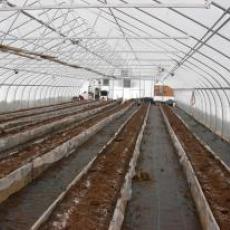 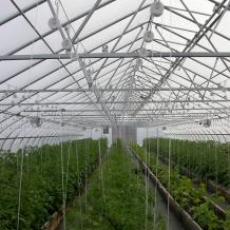 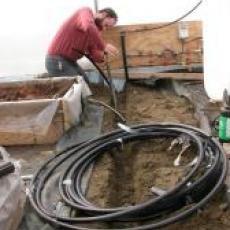