Dave Dumaresq farms about 90 acres of vegetables and about 18,000 ft² of heated greenhouse space.  He grows in his greenhouses for his Brox farm flower sales as well as his vegetable acreage which is marketed thru his two farm stands, several farmers markets, some wholesale and recently his own CSA.  His over all farming operation name is Farmer Daves.   Farmer Daves is a small seasonal New England Farm offering a wide array of flowers, fruits and vegetables.  The farm sells at farmers markets in Revere, Gloucester, East Boston, Lynn, Winchester, Boston, Wakefield, Chelsea, Dorchester, Andover, and Dracut.  His two farm stands are Brox Farm in Dracut and the East Street Farm in Tewksbury Dave started his CSA in 2007, with a total membership of 62.  In 2008 he expanded to 340 members with distribution sites in Dracut, Gloucester, Lawrence, and Somerville.

Brox Farm itself began in 1902 as a typical small NE family farm.  After WWII the last milking cows left the farm and the focus shifted to fruit and vegetable production that would be marketed in the neighboring cities of Lowell and Lawrence as well as the Boston Wholesale market. In the 1970’s a small farm stand was built on the Brox farm which is bisected by Rt. 113. Dave began working on the Brox Farm in 1983. While Dave was serving as a crop extensionist with the Peace Corps in Ecuador, John Brox passed away and the Brox family asked Dave if he would like to operate the farm as his own business upon his return. Dave has been leasing the Brox Farm since 1997. In 1999 Dave began his first farmers market in Lawrence as he was growing a good array of Hispanic crops that found a ready market in the heavily Latino city. Since then he has added an average of one market per year. Also in 1999 he began growing bedding plants in addition to his vegetable plants. This improved the farm cash flow and allowed him to offer more winter employment, thus attracting better employees. From 1998 to 2005 he expanded his greenhouse space from 1,800 ft² to 18,000ft². In 2003 he was asked to take over and lease the East Street Farm on the grounds of Tewksbury State Hospital. The East Street Farm includes 15 acres and a farm stand. In 2006 he purchased the 30 acre Leczynski APR Farm in Dracut. With the uncertainty of future leases, but the certainty of mortgage payments, Dave decided to start his CSA to help ensure the future viability of his farming operation in the event that he looses his leased farm stands.

Dave grows in 7 greenhouses, all of which are 6mm double poly, with poly being changed every 3-4 years and heated with oil. The greenhouses are used for both annuals and the vegetable starts for his farm. The first greenhouse that he opens up in late January is smaller 48'x20' house that he uses for starting seeds and cuttings.  The night temperatures in this starter house are set at 70°F. He opens up another greenhouse every two weeks or so until late April, when all the houses are full. The night temperatures for the later houses run from 58-68°F, depending on what crops are in the house.

The greenhouse that he added the corn stove to is a 30'x96' double poly covered hoop house. The greenhouse is typically opened around February 15th and contains mostly annuals, hanging baskets, and vegetable starts for the farm.  He keeps this greenhouse at about 68°F night temperatures. The greenhouse was primarily heated with forced hot air from a 400,000 Btu Sebring oil furnace.  This furnace was purchased new in 1999 for about $4,000. The unit is serviced by a professional every two years for a cost of about $95. Every other year Dave services the unit himself by changing the fuel filter, nozzle and cleaning out the unit. This furnace typically uses 1100 to 1500 gallons of oil per year. In 2007 the average cost for a gallon of oil was about $2.10, in 2008 about $3.10, in 2009 about $2.05. Dave wanted to reduce his heating cost, insulate himself from the drastic swings in oil prices, and move towards renewable fuel sources. Using a corn furnace to offset some of his oil use in his most heated greenhouse seemed like a good way to meet these goals.

One of Dave's original criteria for a corn stove was that it is portable – he wanted to be able to heat his farm stand through thanksgiving and Christmas season, when the stove would otherwise be idle.  He looked at a few models and at first was interested in the Golden Grains Model 3101 portable stove. He first saw these stoves at the trade show in the New England Greenhouse Conference. These stoves are available locally from Amazing Flower Farm in New Ipswich, NH. They are listed as running between 15,000-170,000 Btu’s when burning corn (thought this may be a bit ambitious) and cost ~$4,000. They come with standard hopper capacity of 150 pounds, and a larger hopper is available for an extra cost that extends the capacity to 300 pounds. It has pneumatic tires and folding handles to increase portability. The issue that Dave came up against with these stoves was that they need to be allowed to go out, cool down, and have the ash cleaned out of them on a daily basis. Dave felt that the daily maintenance outweighed the benefits of portability, and ultimately went with the LDJ Amazing heat furnace. This unit is not readily portable, but should require less daily maintenance than the Golden Grains stove. He ordered the stove, an LDJ620-10R, from a local dealer in Sterling, MA, called 'Yellows Green.' He also gets his corn from Yellow's Green, which he gets delivered to the farm. In addition to the furnace, he got an extension for the hopper ($200) which increases its capacity to nearly a half ton and a corn vac ($521) to more easily transfer corn into the hopper. With the hopper extension he finds that in March he was filling the hopper about once every 10 days.  He keeps his corn furnace thermostat at 70°F and his oil furnace at 65°. On colder nights the oil furnace will maintain the minimum of 65°F. He is experimenting with setting these two temps closer but is finding that when the oil burner comes on it often leaves the temp 4 degrees above the 65°F setpoint. Therefore if it were set at 67°F it would trigger the corn burner to turn off frequently.

Dave finds lighting the furnace to be a fairly straightforward affair, though certainly more work than with his oil furnace. He starts with a small pile of wood pellets and a squirt of gelled fire starter. The wood pellets ignite at 400°F vs. the 1000°F needed to get corn started, so it makes for sort of a 'nurse' fire. When the wood pellets are burning nicely, he switches the furnace to 'start', and it begins slowly dribbling in more corn. After 4-5 minutes, he can switch the furnace to 'on' and walk away.

One potential problem that he's noticed relates to the idle mode of the furnace. To stay lit, the furnace dribbles a small amount of corn into the fire pot all day long, even when the thermostat isn't calling for heat. On sunny days, it gets hot enough to kick on the exhaust fans. Sometimes when that happens air gets sucked through the chimney of the furnace, causing smoke to come out of the air intake on the furnace – basically reversing the draft. Once temperatures start to rise and the heating needs decline Dave shuts off the corn burner and lets the oil furnace manage the heating, as the frequent on/off cycling that happens when heating needs are minimal is better handled by the oil furnace than the corn burner.

Dave feels that the hopper extension, digital thermostat and corn vac were excellent additions.  While the corn vac does not work fast, it can be set up to transfer corn and be left on its own while transferring.  Overall, the corn furnace has been a relatively easy addition to his operation.  It makes his farming operation “greener”; creates more demand for local corn, and it will help to stabilize his costs of production. 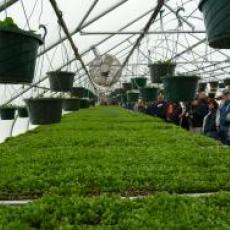 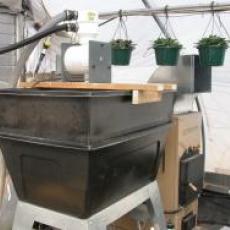 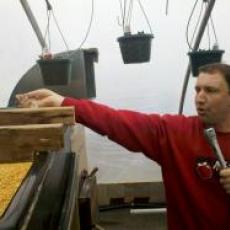 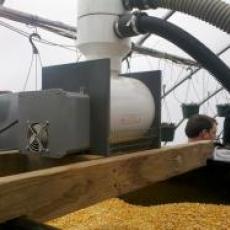