Leaping Frog Farm grows vegetables and small fruits on 1.5 acres of land, in Buckland, MA.  There is an additional 2 acres of field growing for mulch hay.  There are approximately 7000sqft of hoop tunnel space, half of which is minimally heated; and a basement root cellar.  Leaping Frog started distribution in 2008.  We are primarily a winter harvest CSA vegetable farm. From the beginning of November into May we distribute, on a weekly basis, storage vegetables, and an array of freshly harvested greens, herbs, flowers, and roots.  They also grow vegetables, raspberries, strawberries, and ribes fruits for PYO, farmers market, restaurants, and value added product, sold the other months of the year.

The corn boiler feeds bottom heat to three high tunnels, all of which are growing greens in 5 foot, four foot, and 2.5 foot beds.  One of the greenhouses is 72’x30’, two are 80‘x18’, and the last is 21’ x 96’.  The middle two will combine become one 144’ x 18’ foot tunnel. Two of the greenhouses are moveable, and the 144’ x 18’ is composed of 16’ sections that can be moved or removed as needed.  Two of the greenhouses are covered with a single layer of 6mm plastic glazing, and one is covered in 8mm   The larger greenhouse also has 2’ of insulation around the perimeter from soil level down two feet.  The greenhouses are in use most of the year, with seeding beginning in late August and harvests starting in mid-late November.

Mark was looking for a boiler that could burn different fuels, such as corn, wood pellets, or small grains.  This would allow him the most flexibility in sourcing local and affordable fuel.  The A-maize-ing heat unit seemed to be the best solution that was currently available in his price and size range. Outdoor boilers seemed too large a size for Mark’s needs.

Mark purchased an LDJ 165,000 BTU Variable Rate corn-fired boiler from Yellow’s Green in Fitchburg, MA for $6,030.  The boiler has settings that let it run from 80,000-165,000btu’s.  The boiler keeps a 200 gallon storage tank filled with 120 degree water.  Each greenhouse is a separate zone that runs off the storage tank.  Each zone can be controlled independently.  The storage tank is insulated with four inches of hardboard foam, and the bottom 3’ is buried in the ground.  There are 2 heat loops that run through the tank to keep the water at temperature.
Because Mark’s high tunnels are moveable, he required a unique system that would allow the heating tubes and manifold in each greenhouse to be moved.  Partially for this reason, the heating tubes in each bed run at or near the surface.  Each bed has two heat loops.  The manifold, rather than running the full width of the house, is compressed into a ~3’ section in the center of the house.  The entire unit can be disconnected and moved along with the tunnel.  One hoop tunnel moves along a rail and the other, as previously mentioned is moved in sections with a wheel cart.

Pitfalls & Issues with the Furnace:

The only major issue with the system so far has been air in the lines that prevent them from being filled with hot water.   Mark is countering this problem by installing valves to release air, midway down the line. 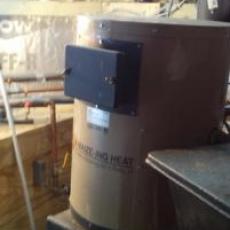 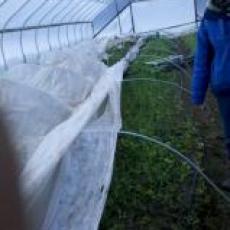 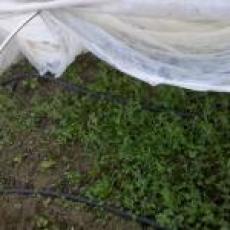 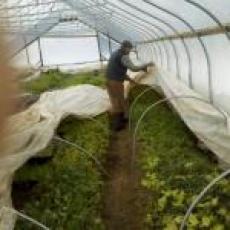