Ravenwold Farm has four greenhouses, one at 53'x96', two at 30' x 96', and one at 17' x 96'; all are gothic style hoop houses covered in 6ml double layer inflated poly.  They use the smaller greenhouse for starts and keep it at about 62°F, then quickly expand into the other greenhouses which are kept closer to 56°F (night temperatures). The greenhouse where they installed the corn furnace is 30'x96', starts up in March and is typically kept at 56 °F.  With the corn unit in place, they have been keeping it a warmer with 60°F nights and 65°F days.  Up until now it has been heated with two Sundair oil furnaces – one rated for 300,000 btu and the other rated at 180,000 btu.  The 180,000 btu furnace will remain in the greenhouse to be used as a backup.

They used to start their greenhouses in February, but have started buying plugs rather than starting from seeds so they could shift production into March to save on heating costs.  Their greenhouses are mostly filled with annuals (~80% of the bench space); the rest is vegetable starts and hanging baskets.  Prior to 2009, they were heating all of their greenhouses with oil.

Saving money and keeping themselves insulated from fluctuations in oil prices has been their primary motivation for experimenting with corn as a fuel source.  They also have the potential to grow their own corn if they can work out how to dry and store it, and have access to a steady supply of woodchips that they could eventually burn in their corn stove if they can come up with an economical way to pelletize them.  Because of the potential for eventually using pelletized woodchips, one of their main criteria was that the stove be able to burn other pelletized biomass fuels and not just corn.

They quickly narrowed their choices down to a either a 100,000 btu furnace from J-Ran Enterprises in MI or the LMF Amaizeing heat furnace. The Ja-Ran unit is rated at 100,000 btu with a 12 bushell hopper, a 1/3 horsepower blower, and will burn corn, wood pellets, and other pelletized fuels.  The LMF furnace is rated at 80,000-165,000 btu, with a 14 bushel hopper, a ½ horse power blower, and will burn corn, pelletized wood, and other pelletized biomass fuels.  They eventually decided to go with the LMF Amaizing heat model because of the more powerful blower and higher btu rating. In addition to the furnace, they purchased a digital corn thermostat that gives them more control over the furnace.  The thermostat is a Corn-Trol unit, which helps to provide fine-tuned temperature regulation.  Without the Corn-Trol unit, the only real control you have over temperature with the stove is to manually set the on/off interval for the feed auger and adjust the air damper on the blower.  The Corn-trol unit will vary the speed of the fan and the on/off interval of the auger dynamically, based on the current temperature and how close it is to your set point.  It is fully programmable and can handle different settings for day and night.  They claim that it can keep the temperature within +/- 1°F and reduce fuel usage by an average of 11% by lowering the temperature of the low-fire mode and reducing temperature swings.

The stove was purchased directly from the manufacturer for $4275 plus $200 freight.  They purchased their corn from Rolling Acres farm in Southampton, MA, Five Point Farm in Northfield, MA, and from Zgrodnik Tobacco in Hadley for an average of $220 per ton.

The Adams haven't had any issues with lighting their stove, as the idle mode has been working fine so far without generating excess heat – possibly due to the Corn-trol.  They fired up their shiny new LMF Amaizeing heat furnace at 5pm on March 1st. All in all, they felt that it took about a month to really get used to the furnace and get all the setting tuned to their liking. They get about one pound of ash for every 100 pounds of corn, and empty the ash bucket daily.

We have three years of data from Ravenwold regarding their stove usage. Over the past three years the Adams have used corn as their primary fuel and oil as a backup. Before installing the corn stove in 2008 the Adams used 750 gallons of oil to heat the greenhouse for a cost of $2,500.  In 2009 oil was $2.29/gallon and corn was $150/ton; they were able to offset their oil usage with corn for a net savings of $1,452.73. The total carbon output from producing and burning corn is lower than the total carbon output of producing and burning oil. In 2009, the Adams had a net carbon reduction of 2,194lbs of carbon. In 2010 the price of corn went up to $200/ton and the price of oil stayed in a similar price range at $2.20/gallon. The Adams had a net savings of $833.56 and prevented 2,509lbs of carbon from being released into the atmosphere.  In 2011, the price of oil went up to $3.50/gallon and the price of corn dropped to $89.29/ton. The Adams were also able to offset more of their oil usage with corn compared to the previous year for a net savings of $2,864.29 and a carbon footprint reduction of 5,546lbs of carbon.

Over the three years of using the corn stove the Adams have reduced the carbon foot print of their greenhouse by a total of 10,249lbs of carbon.

So far they are quite pleased with the way the stove is working out.  Their next project is to figure out a low cost way to dry the 15 acres of corn they planted this spring so that they won't have to buy in any corn at all. 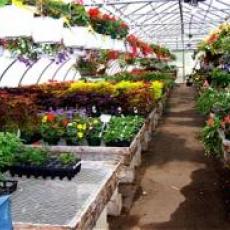 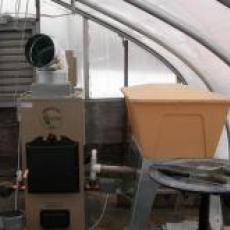 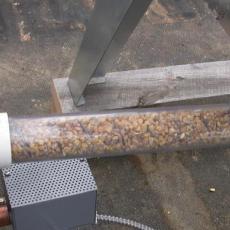 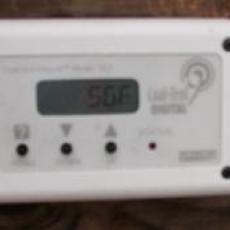