Kosinski Farms is a family farm that started back in the 1930's.   The farm now consists of three pieces, the Feeding Hills farm and the Westfield Farm where the crops are grown, and an affiliated retail stand with bakery and greenhouses, open seasonally.  The Kosinskis grow a variety of vegetables and fruit crops including sweet corn, apples, pumpkins and tomatoes.   Mike Kosinski has been heating his greenhouses with corn for about four years, first with Amaizeing Heat furnaces from Big M manufacturing (Box 319A, 928 East 1090 N. Road, Taylorville, IL 62568, 217-824-9372), and most recently with a Woodmaster AFS 1100 corn burning outdoor boiler.

Mike's biggest corn heat project is a 42'x100' gutter-connect greenhouse.  The walls are double layered rigid polycarbonate, and the roof is an inflated double layer of poly.  He starts the greenhouse in January, and grows vegetable starts for sale and for the farm, as well as bedding plants, hanging baskets, and other annuals.

Prior to switching to corn as a heat source, the 42'x100' greenhouse relied entirely on oil heat, burning about 3600 gallons per year.  Four years ago, Mike put in two A-maizeing heat furnaces from Big M Manufacturing as a way to save on his heating bills.

The A-Maizeing heat furnaces performed well enough for a few years. Burning corn saved significantly on heating bills. There were some minor difficulties with the pilot on the Amaizeing heat going out if they were idle too long.  The pilots were inconvenient to restart.

After the first two years Mike started looking for furnace with higher BTU ratings and a more reliable pilot system, preferably one he could install outside the greenhouse, so as not to take up any valuable floor space.  What he found was the Woodmaster AFS 1100.  This unit installs outside, like the wood burning furnaces many people have installed for their homes.  Unlike the wood burning models, there seems to be no problem with smoke or other emissions from this unit.  It works as a hydronic heating system, using about 180 gallons of water to hold in the heat.  Mike has it set up so that the boiler powers three heat exchangers, each rated for a maximum of 120 btu.  The heat exchangers are rigged in two zones, with the second zone consisting of one heat exchanger that comes on when the first zone has a hard time keeping the temperatures up.  This unit, like the Amaizeing heat furnaces, can also burn pelletized fuel and small grains.  Like most of the corn burning furnaces of this size, there is no automatic ignition.  To light the furnace, you dribble a little corn from the auger into the firepot, add about a cubic foot of charcoal with some lighter fluid, and light it manually – much like lighting a charcoal grill.  Once the furnace is lit it stays lit – Mike only had to re-light it once last year.  The boiler is fed by a silo that sits next to the furnace.

The Woodmaster is also fairly easy on upkeep.  The tubing needs to be brushed out every two weeks or so, a job which takes about ½ hour and can be done while the system is running.  The ash bucket needs to be emptied on a daily basis.  The only modification that Mike found necessary for using the Woodmaster was to widen the fixture on the furnace to receive the feed pipe from the silo.

One of the advantages of an outdoor hydronic heat system is that the heat generated during the day when the furnace is idle – basically, just dribbling corn into the firepot to stay lit – can add excessive heat to the greenhouse and waste corn.  With this unit, all that heat is used to keep the water at temperature.  Another benefit of the hydronic system is that there is a large amount of water – 200 gallons of water is a decent amount of thermal mass.  Two hundred gallons of water will lose about 174,300 btu as it falls from 185 degrees to 80 degrees.

Burning corn saved significantly on heating bills, replacing 3600 gallons of oil with about 20 tons of corn for a heating season.  With oil at $3.50/gallon and corn at $200/ bulk ton, Mike is saving about $8,600 per year.  The Amaizeing heat units quickly paid for themselves.  Overall, Mike feels that the Woodmaster system is much easier to use and even more economical than the Amaizing heat units.

In 2008, Mike expanded his corn operations to about 200 acres.  The majority of this will be sold for poultry feed, but he will keep enough to supply all of his heating needs.  He gets yields of about 180 bushels to the acre, and he uses about 20 tons of corn in the course of the winter, so he can grow all of his fuel on about 4 acres. 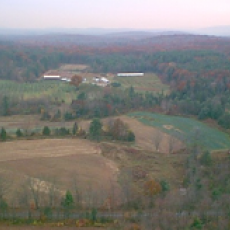 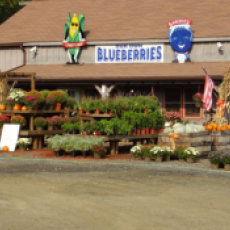