Drought conditions continue in most of the state (approaching 93% affected) and for the first time a significant area (approaching 18%) has reached Extreme Drought status.  This is in the Northeastern part of the state with almost all of Essex County included.  Only far Western Berkshire County is considered NOT to be in drought at this time.  Most of our region is in the Moderate Drought status. Information about Drought Conditions and resources for Drought Response for fruit growers can be found at: https://ag.umass.edu/news/2016-drought-information-resources. (Thanks to S. Schloemann for this information)

Massachusetts last went through a severe drought in 2002, according to the National Weather Service. While cranberry farmers have a small advantage because the fruits have a later harvest than other crops, it will take a lot of rain to make up for such a prolonged shortage.

Other pest concerns with drought/dry conditions:

•Upright dieback-There are three phases during the season when symptoms appear: one shortly after the winter flood has been withdrawn, another in June and early July, and another phase in late August and September. Damage caused by this disease appears to be worse during growing seasons that have prolonged periods of drought or heat stress. This weakens the vines making them more susceptible to infection by fungal pathogens.

•Fairy ring is also worse during periods of drought.

•Weed control will be reduced when weeds are under stress. Plan your herbicide applications for some time AFTER irrigation events to take advantage of improved water status.

This work was supported in part by funding provided by USDA-NIFA Extension Implementation Program, Award No. 2014-70006-22579 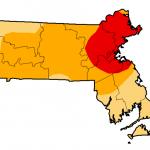