Flea beetle continue to be a nuisance feeding on overgrowth on the bog. Unless you sweep and get 25 or more on average per sweep set, it does not warrant using a Diazinon at this point.

Surprisingly, the second recorded population of fire beetle (Cryptocephalus incertus) was found in Rochester this week (first recorded was in Wareham last year). We have not seen this insect on commercial bogs for 50 years, although populations had been found on the wild bogs in Sandy Neck in recent times. You should watch for fire beetle in your sweep net when checking for flea beetle, they may well warrant a Diazinon application. Another pest to watch for!!

Fire beetle is slightly smaller than flea beetle but has brown stripes, while flea beetle is always pure black (with a red head) and enlarged back legs used for jumping. Feeding is very similar to flea beetle, skeletonizing new growth. Please contact Marty (x20) or martys@umass.edu if you have any questions. 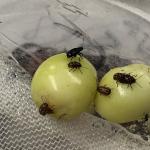 Flea beetle upper left, all others are fire beetle 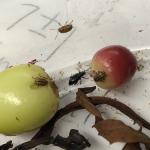 Flea beetle in center, other 3 are fire beetle 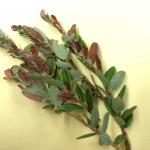