Cranberry fruitworm egg-laying is likely on the decline in most areas; first and second sprays have already gone out on most bogs.  Reports on Spag flight indicate it is declining as well.  Treatments with compounds other than Confirm or Intrepid (e.g. Delegate) go out 10-14 days after peak flight, typically mid-to-late July.  Oriental beetle adults are likely at peak flight with numbers now declining.  It is a small beetle, just over a ½ inch long, color patterns vary greatly from light brown to black.  This warm winter allowed for much feeding damage; dead spots are evidence of their damage.  Consider applications of imidacloprid products such as Admire in a few weeks.  A soil drench treatment is recommended for OB.  Earlier applications are better than late ones as the insecticide is most effective when present prior to or at egg hatch.  Highly toxic to bees!  So wait for pollinators to leave the bog. 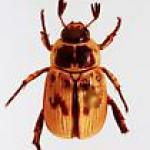 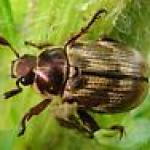 We have received questions about tank mixing with Altacor. We have not tested Altacor in a jar test with other pesticides.  Growers have mixed it with Bravo and with Manzate without problem, but you must have agitation throughout the application.  If you have different experiences with mixtures than that listed in the chart that was sent out with the last newsletter, PLEASE let me (Hilary) know.

Scouting for fruitworm eggs typically starts 1 week after the second treatment.  However, if you have had low pressure and want to save some money on a second spray, you can scout for viable orange-lined eggs after the first spray and only spray when the numbers trigger a spray.  Randomly pick 50 berries/Acre with a minimum of 200 berries per management system.  Look in the calyx end (opposite the stem end) for the eggs (photo on right show a viable orange-lined egg).  A microscope (even one with low magnification) is helpful for ID’ing the status of the eggs. 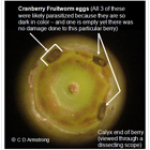 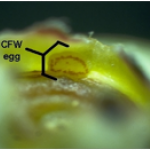