Spag finds continue to be the hot insect topic this week.  Some second generation weevils have been picked up.  Now is also the time that you might be seeing true brown spanworms showing up as thread-like larvae on the rim of the net.

First fungicides for fruit rot go out at early bloom, which may occur next week in some areas.  Vine growth is very variable.  Some bogs could see first open blooms in the next few days and many are at hook.

Just after the frost events of last weekend, we have gotten reports of some cupping of the tops of uprights on bogs that were treated with QuinStar.  Below is a photo of the injury.  The vines seem to be coming out of it.  We are not sure what is going on exactly but suspect that perhaps the herbicide is making the vines a bit more susceptible to cold injury.  If you have seen this, please let me know.  We will keep you posted on how the vines recover and respond.

The next message will be updated by June 21. 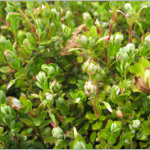