Weevil has finally peaked out and Actara treatments are working well.  Some Avaunt success has also been reported.  Sparganothis and Black-headed fireworm should be wrapping up, but just like with the vine development, size is all over the place.  Small and large larvae of both can be found, but management is likely too late at this point.  Pheromone traps should be up.

Scale damage can now be seen.  If you are seeing dead spots or areas of dieback, NOW is the time to get a sample of the vine (long uprights on the edge of the dead area) in a plastic bag, marked with name, site and contact info to Marty (cooler outside front door of lab building).

Regarding scouting: Winter moth or green spanworm, that is the question.  Several growers have reported high (10-30 count) spanworm in sweeps.  Winter moth is more widespread than we had predicted but generally at low levels.  Management should not be considered unless you see high counts (>18 average over the whole bog) and of the options (Delegate, Avaunt, Orthene, Sevin), there is little consensus for which is best.

Gypsy moth, false armyworm, blossomworm, black headed fireworm (and even Sparganothis) have all been seen, but again, all in low numbers.

Weevil numbers have been found over threshold in some cases and have been treated by some growers with Actara.  Surprisingly however, many sites where they had been bad in the past have not turned up close last years’ high numbers!  The weather continues to make sweeping and management difficult.

Side by side Black-headed Fireworm larvae (left) Scale damage (right) 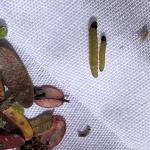 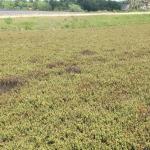