Bloom is here and as you are getting ready for fruit rot fungicide applications, here are important things to keep in mind.

Putnam scale is in stunning numbers on some bogs and is the cause of some, but surely not all of the dead spots that we are seeing on bogs. Females are immobile bright yellow blobs under a bark-colored cover. Check on the older wood of the vine for roundish white spots where the scale has fallen off, or for bumps on the vine that exude yellow goo when squished.  Crawlers emerge from under the female’s cover, find a spot to permanently settle, and create a bright white cover. Drop off suspected vine samples at the Cranberry Station, cutting living whole uprights near the soil just outside the dead area.  Consult us for treatment.

Golden casebearer is a tiny beetle, about 1/2 the size of a cranberry weevil. Look for fast-moving, tiny roundish beetles that are dark to golden. Injury appears in patches across the bog where all flowers are eaten. It may be too late to treat if you have entered bloom/bee arrival.

Sparganothis fruitworm moths have started to fly.  Larvae were remarkably variable in size on many bogs. For example, moth flight (look for bright yellow moths with a brown X on wings) has started while there are still medium-sized larvae picked up in sweeps. Populations appear higher than in some other years.  If you think you missed the spring population, put up a pheromone trap and see if you catch moths. Intrepid could be applied during bloom, using two applications, one at end of June and another 2 weeks later. Delegate could be used against larger larvae at end of bloom.  Please see photos below for moths that you will be catching in your traps. 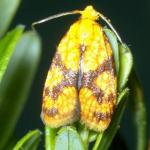 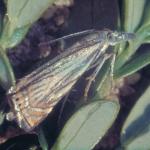 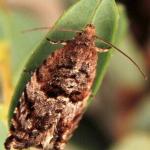 Cranberry weevil numbers are still high on some bogs, and sweeping will pick them up now. The females are laying eggs in blossom buds at this point and the new population will appear in July. Spring Actara was effective for management. Given that bees are arriving and that bloom has started, it is too late to apply Actara now.

Look for Green Spanworm Moths flying on bogs to signal population levels. Injury is mostly done for the season: You may see the first flight of moths, which are small yellow (females) or white (males) with scattered brown markings (see photo). Eggs will hatch next year, so if you see a lot of moths now, think about green spanworm management early next spring. We are watching to see if this earlier-than-expected activity allows a second generation this summer (never seen before). 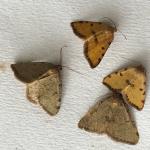 What we have not seen in our scouting trips

The tiny Blunt-nosed leafhopper, the vector of false blossom has not appeared in large numbers on any conventional bogs that we have scouted.

Winter moth larvae, which look like a green spanworm in the larval stage, were not found on bogs.