Effects of Growing Media on Water and Nutrient Management

Effects of Growing Media on Water and Nutrient Management

Effects of Growing Media Characteristics on Water and Nutrient Management

Growing media consist of mixtures of components that provide water, air, nutrients and support to plants. The media provide plant support, while the nutrients are provided by added fertilizers. Water and air are provided in the pore spaces in the media. Four main factors affect air and water status in containers: the media components and ratios, height of the media in the container, media handling and watering practices.

Only a portion of the water added to media is available for root uptake. Available water-holding capacity is the amount of water held in the root zone and available to plants between irrigating and when the plant wilts. In a 6-inch pot, approximately 65 percent of the pore space is filled with water after the pot has been saturated and allowed to drain. Generally only about 70 percent of that water is available; the rest is called unavailable water. The amount of available water depends on how tightly the water is held to the particles of materials that make up the media (matric tension). For example, peat has relatively higher unavailable water contents at a given matric tension compared to rock. This variability in the availability of water in different types of media components means no two media are exactly alike in terms of providing water to plants. This makes knowing when to water difficult. Another important characteristic of media components that influences watering practices is wettability, i.e., the ability of dry media to rapidly absorb water when moistened. A surfactant used occasionally can help media rewet more readily. The choice of media should be influenced by irrigation systems and practices.

Another factor relating media to air/water relations in the root zone is the size of the growing container. With media in containers, the amount of air and water held in a given growing medium is a function of the height of the column of media. The taller the column of medium, the smaller the ratio of water-filled pore spaces will be to air-filled spaces. This is most important in plug production where the small cells drain very poorly or not at all, resulting in poor root zone aeration. In all containers, there will be a certain amount of saturated medium at the bottom of the container after drainage. This is due to what is called a perched water table. The saturation zone is a larger part of the total volume of the growing medium in a very short container, such as a plug cell.

How soilless growing media are handled can greatly influence their air and water characteristics. The major concern is to avoid compaction. Containers, including plug trays, should be lightly filled and the excess brushed off the top. Air space can be drastically reduced by compaction. At no time should any growing containers be stacked. The moisture content of the medium prior to filling containers may also be important. Adding water to peat-based mixes before filling plug trays causes the media to swell and helps create more aeration. Water added to about 100 percent
by weight of the media is sufficient for cell packs. Plug mixes should have about 200 percent by weight water added before filling plug trays. Moistening of the medium before filling larger containers does not have much benefit.

Growing media for use in container production in greenhouses contain a variety of soilless ingredients such as peat moss, vermiculite, perlite, shredded coconut husks (coir), composted bark or other composted materials. Field soils are generally unsatisfactory for the production of plants in containers because soils do not provide the aeration, drainage and water holding capacity required and they need to be pasteurized or fumigated to prevent diseases and weeds. Most commercial greenhouse media for container crop production contains 30 to 60 percent peat moss alone or in combination with composted pine bark. Other materials such as vermiculite and perlite are added to affect water retention and aeration.

Growing media are designed to achieve high porosity and water retention while providing adequate aeration. A nutrient charge is added and the pH adjusted to approximately 6.0. A non-ionic wetting agent is generally added to peat and pine bark-based media to improve initial wetting. Both can become hydrophobic when the moisture content drops below 40 percent. For most greenhouse crops, the initial pH of growing media should be between 5.8 and 6.2. Since most components of media are acidic, dolomitic limestone (calcium and magnesium carbonates) is added to start at an acceptable pH range and provide Ca and Mg for plant growth. The smaller the particle size of the ground limestone, the quicker is the increase in media pH. Commercially blended media typically have limestone already incorporated.

Variations in the recipes result in media designed for particular situations. For example, a formulation for plug production may have high porosity for adequate aeration in small growing cells, be buffered against rapid pH changes and contain a light nutrient charge and low level of wetting agent. Applications requiring rapid drainage, such as outdoor-grown mums and perennials, benefit from a high-porosity medium based on pine bark.

Premixed media is common in the greenhouse industry. Suppliers offer a diversity of mixes in either prepacked (bags, bales, super sacks) or bulk forms. Recipes are specially formulated for propagation, specific crops or general crops. If significant quantities are required, growers can purchase media customized to their specific operation by requesting specific amendments including lime, wetting agents and fertilizer.

Use of Composts in Growing Media

While most growers use soilless peat-based growing media, there is a growing interest in using composts as a substitute for traditional soilless media, especially for organic crop production. Compost-based mixes can be purchased just as soilless mixes are, or growers can compost organic waste and create their own mixes. See section on organic waste management for details about composts.

Research has shown that organic materials that have been properly composted can be successfully used in potting mixes. However, when used as a component in a potting mix, most of the time, the compost cannot supply enough nutrients and additional fertilizer must be applied.

While it is possible to use 100% compost for container grown greenhouse crops, the commonly accepted recommendation is to use compost at about 30-40% by volume. Most composts are too heavy, hold too much water or drain too much, or have too high a starting EC to be used 100%.

Many materials used to make growing media in “traditional” greenhouses such as peat moss, vermiculite and perlite can be used for organic production.  Check with an organic certifier.

Many different organic media can be formulated from a host of organic-approved materials and additives available. A good starting point would be to follow a proven recipe and then make your own modifications later. The NCAT (ATTRA) publication “Potting Mixes for Certified Organic Production” lists about 30 different growing Media recipes available from www.attra.ncat.org.

Here are two simple mixes made of commonly available materials.

Notice that the mixes do not contain wetting agent or starter fertilizer. It should wet up without a problem, but make sure these mixes are thoroughly moistened before planting and fertilizing should start shortly after planting.

The main differences between the classic 1:1:1 mix and the original Cornell Mix is the use of bone meal and blood meal to supply N and P instead of a chemical fertilizer. You could add greensand for K or apply a fertilizer after planting supplying potassium (K). Liquid fish fertilizer and/or a kelp extract fertilizer would be likely choices.

The blood meal, rock phosphate, and greensand supply N, P, and K. The month after mixing and before planting presumably allows the fertilizer materials to partially breakdown and release plant-available nutrients. Test this recipe on a small number of plants before you adopt it for all your plants.

Don’t want to make your own mix? Some of the familiar manufacturers of soilless mixes are making organic versions such as Sungro Horticulture, Fafard and Premier Horticulture. Currently, Sungro Horticulture lists several types of organic media packaged for growers. Most are OMRI-approved.

Plastic bags filled with soilless growing media are often used to grow crops such as greenhouse tomatoes. Bags are usually placed in rows on the floor and are drip irrigated. The relatively low water holding capacity necessitates frequent irrigation and precise control of water distribution and nutrient levels. Soil testing should be done weekly to monitor plant nutrition.

Growers of greenhouse vegetables grow crops and cut flowers may grow directly in the ground, or raised beds.

Soil compaction often occurs during greenhouse construction which can limit plant growth. Even when the topsoil is worked, plants may suffer once roots reach the compacted subsoil. The best approach to in-ground culture is to deeply amend the greenhouse soil with compost or peat moss. Test the soil to monitor soluble salts and take precautions to avoid over-fertilization.

When growing directly in the ground, the soil is steam treated to kill pathogens and nearly all weed seeds. Treatment with steam is preferred over fumigants because it is faster, very effective and safe. See information on steam treatment under the Disease Management section. 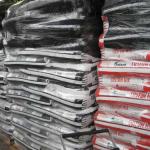 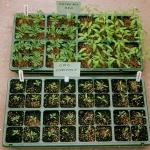 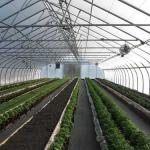 ‹ Irrigation Systems up Nutrient Management ›
Back to top