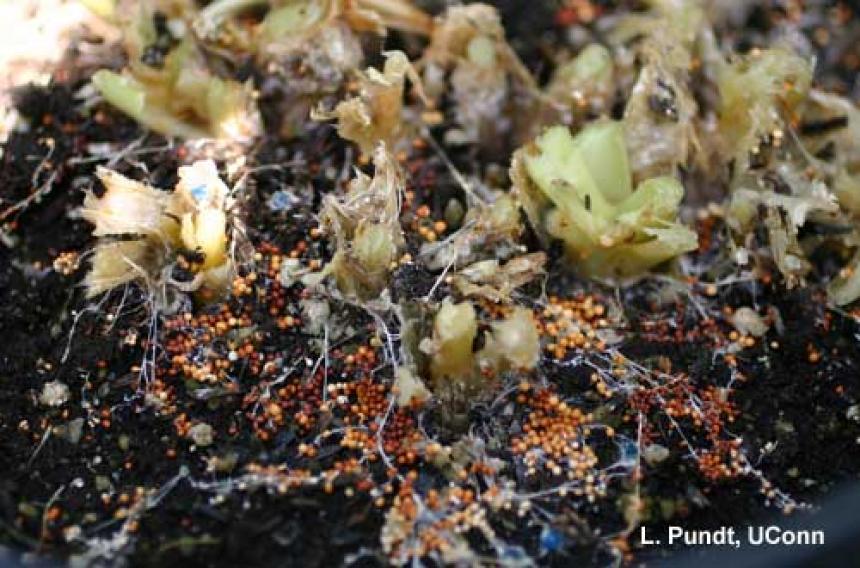 Sclerotium crown rot is caused by the fungus Sclerotium rolfsii and is generally more common in more southern regions. Other names for this disease are Southern Blight, Southern Wilt, and White Mold.

Initial above-ground symptoms can include discoloration of lower leaves, wilting, and collapse. These are often followed by plant death. Symptoms are easily confused with other basal stem rots such as those caused by Rhizoctonia or other fungi. However, look for fluffy, fan-like white mycelium (often with a distinct "mushroomy" odor) near the crown on the media or soil to distinguish Sclerotium crown rot. This fungus forms sclerotia, a distinguishing characteristic of this disease. (Sclerotia are compact masses of fungal hyphae that can survive unfavorable environmental conditions.) They are first white, and then darken to tan as they mature. Growers often say they resemble "tiny mustard seeds" that are about .04-.08 inch in diameter. The blue pellets in this photo are Mesurol bait used to manage slugs.

Sclerotium rolfsii is soil-borne and attacks plants at or below the soil line. In addition to persisting as sclerotia in the soil, the pathogen can be carried on rhizomes and bulbs. The disease occurs during the summer months and is favored by warm, moist soil. Dig and burn plants that are seriously infected. Solarize or otherwise pasteurize soil before planting. Remove soil from affected area and replace with new or sterilized soil. Use only pathogen free stock. Avoid overwatering and provide good soil drainage, for example, by planting in raised beds. The fungus is killed by exposure to temperatures of 122 F (50 C) or higher for thirty minutes. Rhizomes or bulbs can be treated with hot water to eliminate the fungus. Soil drenches of fungicides (Cleary's 3336, Terraclor) around the base of plants before infection can prevent disease development (but will not cure affected plants). Amendment of the soil with biological control agents such as MycoStop, PlantShield,SoilGard, or YieldShield may offer some control.