Yesterday we were conducting some research in the eastern end of the state (near Route 495 and the Turnpike intersection). The superintendent had applied chlorpyrifos a few days earlier, to control annual bluegrass weevil adults. What caught our attention was a large number of crane fly larvae wriggling on the surface. We suspect the chlorpyrifos agitated the larvae, and they headed to the surface to get away. Unfortunately (!), they appeared to be quite healthy - and they are still moving quite readily here in the lab a day after we collected them.

It is virtually impossible to identify crane fly species from larvae, so we don't know for sure what species they are. It is possible they are a native species, but we suspect they are Tipula oleracea, one of the invasive species. We know we have populations of this species throughout southeastern Massachusetts, and the timing for this larval activity matches their life cycle perfectly. And crane fly larvae do best when soils are very wet, as most of our New England soils are right now. Crane flies prefer turf maintained at higher mowing heights, and they occur on lawns and golf course roughs.

If you are "out and about", and happen to see some wriggly larvae that are brown and kind of look like caterpillars, take a close look and see if they have any legs. Caterpillars have legs, crane fly larvae don't. And the crane fly larvae have a star-like projection on the tail end. If you do see some of these larvae, send us pictures and let us know WHERE you saw them. (We are trying to get an idea of how widely spread these crane flies are in southern New England.)

Because these larvae are large enough to attract the attention of skunks, raccoons, and other "varmints", it is possible that you will see some turf torn up where these predators are searching for dinner. But it is too late to do anything about these larvae right now. They are nearing the end of their development and will be pupating soon. Watch for structures that look like twigs sticking out of the ground a week to 10 days from now. These are pupae, just before they emerge as adults. Watch for adults a couple weeks from now. (They look like really large mosquitoes.)

No insecticide trials have been conducted on this species, but we assume that the products that have been shown to be effective against the European crane fly (T. paludosa) would work against this species. If you see damage from these larvae, or experience disruption from foraging skunks or raccoons, you can apply an insecticide when you see the adults emerging. That should knock down the population as the young larvae hatch and prepare to feed through the summer. Based on studies conducted by Dan Peck when he was at Cornell University, many products have been effective against ECF when applied when adults are flying or larvae are just hatching, including some of the neonicotinoids, pyrethroids, and diamides.

Please let us know if you see any of these larvae!!! 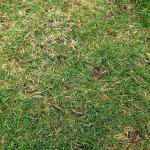