Annual Bluegrass Weevil (ABW): ABW season in 2020 had a prolonged adult activity period followed by “express” larval development. Growing degree day (GDD) accumulation in Massachusetts and northern Connecticut had a quick start in early March and increased relatively rapidly up until mid –March, with a couple of days in the high 60s F for most of our locations. This rapid accumulation set the expectations for the early season. In fact, by the end of March, the first adult weevils had been already found on fairways.

In April, however, the weather cooled down and GDD accumulation plateaued. By the end of April, most locations had accumulated only ~20-30 GDDs in Massachusetts, 44 GDDs in Connecticut, and 51 GDDs in Albany NY. These figures are considerably lower relative to the same time period in 2019 (by the end of April 2019, average GDD accumulation at the same sites ranged from 120-136 GDDs). Meanwhile, adults were observed on fairways during all of April this spring and peaked late in the month, when temperatures started increasing.

In May, the increase in temperatures resulted in the rapid accumulation of GDDs. As of the first of June, all of our monitoring locations have reached or have been approaching 400 GDDs. Average larval instars are ranging 2.6-2.8 this week. For comparison, the larval developmental stage was on average 3.6-3.8 in the first week of June, 2019. Larval development was delayed for several weeks this spring, but now that the larvae are showing up, they seem to be developing quite quickly. Warmer temperatures forecast for this weekend will only speed their development even more. This year we have observed high larval densities in the middle of fairways, which is not very common for the spring generation. Overwintered weevils tend to lay most of their eggs near the edge of short cut grass, causing “ABW signature” edge effect in larval densities and damage. It is possible that prolonged activity of adults on the short grass resulted in more uniform larval distribution across fairways than usual.

This year, all available monitoring tools had to be used to pinpoint the timing for applications: degree days, plant phenology and, most importantly, sampling.

Forsythia had a very long blooming period this year which mirrors the prolonged adult activity. Hybrid Catawba Rhododendron is in full bloom now, which is only slightly ahead of larval development. The time is now to scout for larvae feeding outside of the stems and make a larvicide application if needed.

To monitor larval presence and/or abundance, take a cup-cutter plug and carefully tease apart the plant tissue, looking for small larvae. They are likely to still be very small, and some may still be inside the stems, but look carefully for the cream-colored larvae (less than 1/8 inch) in the foliage or moving toward the thatch. The window for larval treatments (“larvicides”) may be fairly short this year.

White grubs: The window of opportunity for preventive diamide applications (chlorantraniliprole) is about to end. This application targets young larvae of the new generation and ideally should be conducted before June 15. The next window of opportunity for annual grub preventive management will be in July when adults are flying and laying eggs. During that time, the recommended options are neonicotinoids, which target hatching young larvae.

By now, most white grub species are finishing their development and getting ready to transform to adults. So, no curative applications are recommended at this time. European chafers are expected to be flying very soon (mid-June in Massachusetts).

May /June (Phyllophaga spp.) beetles were flying at the end of the last week (Fig.1,2). Adult beetles are attracted to lights and often dead beetles can be spotted near the lights the next day. May/June beetles take three years to complete development from eggs to adult beetles. These are an occasional and usually localized problem for turf. Adults feed on shade and forest tree foliage, and often prefer oaks. Similar to annual white grub species, May/June beetle larvae feed on grass roots, and can potentially cause damage. In addition, larvae can feed on the roots of shade, forest and even Christmas trees, which can be damaging to the young trees.

Billbugs: During the past 2-3 weeks we have observed increased billbug adult activity. Adult billbugs usually overwinter in sheltered areas and come back to turf at this time of year to feed, mate and lay eggs. Small (1-2 instar) billbug larvae feed inside the plant. Later larvae come out of the plant and feed on the crowns, causing severe turf damage. Damage is most apparent in July, especially if the weather conditions are dry (Fig 3). If a high-density population was noticed last year, now is a good time to consider preventive application. Systemic insecticides (neonicotinoids and diamides) are the best option for the larvae feeding inside of the stem. 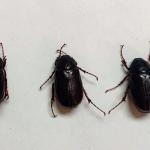 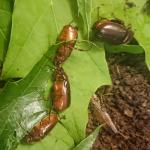 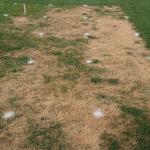