“Boys, be ambitious. Be ambitious not for money, not for selfish aggrandizement, not for the evanescent thing which men call fame. Be ambitious for the attainment of all that a man can be.” 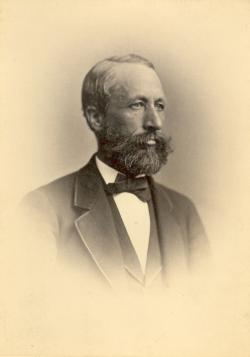 The words of an unsung hero of early American agricultural education, a colorful international character, and foundational early leader of the University of Massachusetts Amherst, resonate today as they did when he proclaimed them in 1877.

They are the words of William Smith Clark, third president of Massachusetts Agricultural College and founder of the Japanese Imperial College of Agriculture/Sapporo Agricultural College (now Hokkaido University, one of Japan’s seven major universities) in his farewell address to the first class of undergraduates at Sapporo. Clark remains a well-respected public figure in Japan, the slogan “Boys, be ambitious” still widely known today. It remains the municipal slogan of Kitahiroshima, a town just outside Sapporo.

Clark, a German-educated chemist, was a professor at Amherst College when Massachusetts Agricultural College, predecessor of UMass Amherst, was founded nearby in 1863. He had recently returned from the Civil War battlegrounds, where as a Colonel he had fought in the battles of Second Bull Run, Antietam and Fredericksburg. He returned to Amherst to find that an effort he had earlier strongly supported, the establishment of a public college of agriculture, had in fact occurred. Clark became president in 1867; he appointed the first faculty and welcomed the first class of undergraduates (the “Pioneer Class” of 1871) that same year.

From the New England Historical Society

From Special Collections and University Archives of the W.E.B. Du Bois Library at UMass Amherst

Cultivating Agricultural Education in Amherst, From Massachusetts Agricultural College to the University of Mass., 1863-1947, a 10-page booklet from historical material developed in 1988 to recognize the 125th anniversary of the University's founding.