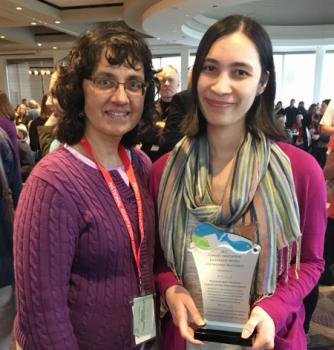 The Massachusetts Wildlife Climate Action Tool partnership was awarded a 2017 Climate Adaptation Leadership Award at the National Adaptation Forum in St, Paul, Minnesota on May 8. University of Massachusetts project manager, Melissa Ocana, accepted the award on behalf of the partnership.

The award was presented by the Joint Implementation Working Group of the National Fish, Wildlife, and Plants Climate Adaptation Strategy (NFWPCAS). A UMass-based team led by Scott Jackson, Associate Professor, Environmental Conservation, created a highly-interactive useful website to inform and inspire local action in response to the impacts of climate change by providing information on climate science, species vulnerability, and adaptation actions that can be taken now. Jackson, project leader, said, “The idea that people need to take action to cope with climate change (climate change adaptation) is still relatively new. So, we expect use of the site to start slowly and pick up over time. The state is about to launch a municipal planning initiative focusing on climate change vulnerability and adaptation action. We created this tool with an eye toward that initiative. We expect that communities and regional planning authorities will find it a useful resource for vulnerability assessment and adaptation planning.”

The Climate Adaptation Leadership Award for Natural Resources was established in 2016 to bring to light many of the outstanding projects or activities that are advancing the resilience of our nation’s valuable fish, wildlife and plant resources in a changing climate. This award acknowledges the leadership of those individuals, organizations, businesses and agencies that are making it happen and promote their work as examples of successful climate adaptation.

As a recipient of the Award for Natural Resources, the partnership is recognized for demonstrating exemplary leadership in reducing climate-related threats and promoting adaptation of the nation’s natural resources. The project is a collaborative effort that also includes Michelle Staudinger and Toni Lyn Morelli from the Northeast Climate Science Center based here on campus (both are adjunct faculty in ECO) and John O'Leary (recently retired) and Jonathan Brooks from the MA Division of Fisheries and Wildlife.  A full list of team members can be found here.