Can American Elms Return to Our Towns? The Research Continues. 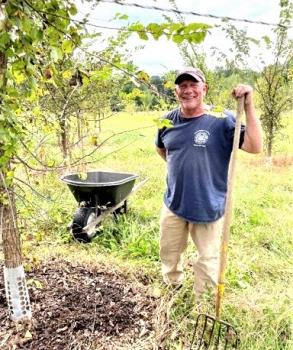 “If we think about it, there’s a reason so many of our New England communities have an Elm Street... there once were elms everywhere,” states Richard (Rick) Harper, extension associate professor and urban forester, as he trims weeds among the research elm specimens at the University of Massachusetts Amherst. Though once commonplace, mature elm trees, with their iconic vase-shaped branches, are now found mostly in archival photographs. In the 1930’s, Dutch Elm Disease (DED) was introduced to North America, where it eventually devastated highly susceptible populations of native American elm across the U.S. and Canada. The community streets, parks and landscapes that were once covered with the canopies of these trees were left sun-scorched and barren.

Today, in an effort to return these lovely trees to our landscapes, Harper, along with extension plant pathologist Nick Brazee and a team of students and volunteer arborists, continues to nurture American elm research specimens on a fenced acre of the UMass Agricultural Learning Center grounds. The seed for these trees was obtained from the USDA Forest Service elm research station in Delaware, Ohio. They were germinated in the College of Natural Sciences greenhouse by undergraduate students in the UMass Arboriculture/Urban Forestry program and then transplanted to the field, commencing in the autumn of 2016. These trees represent crosses of American elm varieties that have already demonstrated high levels of DED resistance, based on previous inoculation trials. As part of this long-term research endeavor, growth and survival data are routinely recorded as the research specimens become established. Trees are monitored for structural/aesthetic performance, compatibility with urban environments, and long-term survival.

Once a year, a team of arborists from across the state convene to volunteer their time and energy towards maintaining this plot of about 200 trees. This year, in September, Greg Dorr principal of Lone Pine Tree, arrives on-site with equipment in hand exclaiming “I love the American elm. I will do anything I can to help reintroduce this tree to the urban landscape.” Christopher Copeland, doctoral student in Harper’s Urban Forestry Lab, is currently conducting research on Dutch Elm Disease. He feels hopeful that efforts from initiatives like the UMass restoration project will translate into a successful comeback for the American elm. According to Copeland, “to increase success of the long-term restoration of this tree, it is crucial to increase the palate of high-performing DED-tolerant genotypes that are well-suited to the challenges of urban settings.”

Westfield tree warden Scott Hathaway, a graduate of Stockbridge School of Agriculture, is hard at work moving mulch from tree to tree. He expresses that he lends a hand every year because he wants to give back to ‘dear old Stockbridge.’  He reminisces about a Jefferson elm he planted at his home and aims to make sure people have access to the graceful native elm trees like that one in the future.

From deer browse to gypsy moth, these specimen elm trees have been challenged by multiple pests at every turn. “The fact that we have around an 80% survival rate of these trees is already a testament to how well they bounce-back from the challenges of the landscape – it will be interesting to see how they perform in the harsh urban environment,” says Harper. Seedlings that were the thickness of a pencil and only a few inches tall when transplanted here are now growing vigorously.  Harper, Brazee and the entire crew of students and volunteer professionals are expressing a renewed sense of excitement about the future prospect of returning Massachusetts’ official state tree to an Elm Street near you. 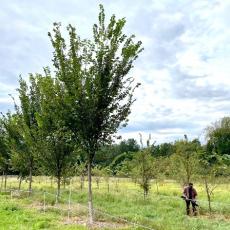 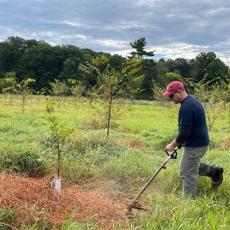