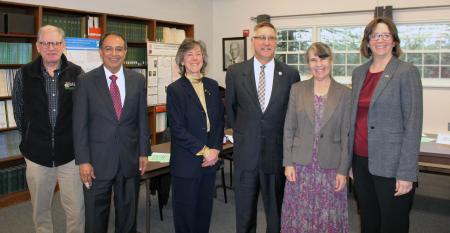 In late November, Chancellor Kumble Subbaswamy of UMass Amherst visited the UMass Cranberry Station in East Wareham. He arrived to tour the station and to offer financial support to update two buildings with a new roof for the Station’s Administration Building and an upgrade to the HVAC system in the Laboratory Building. The UMass Cranberry Station is one of the preeminent research and educational outreach centers on cranberry production and was founded in 1911.

Chancellor Subbaswamy and other guests from UMass Amherst met with the Station’s Board of Oversight, a state government-appointed advisory board co-chaired by Senator Michael Rodrigues and Representative William Straus. Accompanying him on the tour were Tricia Serio, dean of the University’s College of Natural Sciences; Jody Jellison, director of its Center for Agriculture, Food and the Environment; Chris Dunn, University executive director of public/constituent relations. Hilary Sandler, director of the Cranberry Station and other Station staff also participated.

Sandler says, “We are grateful for the Chancellor’s support of our efforts and look forward to starting the work very soon. Upgrading our infrastructure is critical to fulfilling our mission for cranberry growers and other stakeholders in Massachusetts.”