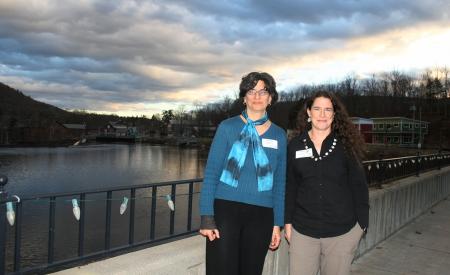 On a quiet Friday afternoon in early December, two UMass Amherst professors, authors of the just-released booklet Supporting Communities to Become River-Smart, discussed their policy recommendations with a gathering of planners, state officials from Massachusetts and Vermont, community members and others. Celebrating the new publication at a location alongside the Deerfield River in Shelburne Falls, site of significant flood damage during Hurricane Irene in 2011, seemed particularly appropriate.

Eve Vogel, UMass associate professor of geography and lead researcher, along with Christine Hatch, extension assistant professor of geology, shared five target policies from the new 90-page report, “Supporting Communities to Become River-Smart.” The project began with a three-year “integrated research and extension” grant from the UMass Center for Agriculture, Food and the Environment with funding from the National Institute of Food and Agriculture at USDA and continued with additional grant funding from the U.S. Army Corps of Engineers Institute for Water Resources.

The study was a multi-state initiative, with input from across New England. It supports community-based initiatives to understand and then accommodate rivers and streams in doing what they are bound to do, rather than to build massive and expensive structures in an attempt to control them.

This report is intended primarily for policy-makers: municipal leaders and others who have the power to effect change. The authors found that the type of flooding that devastated towns throughout central New England in September 2011 can be mitigated with relatively little in the way of additional cost and regulatory change. The full report offers the most complete analysis to date of the dynamics of the stream flooding that has repeatedly devastated New England towns. Its recommendations are intended to make federal and state programs significantly more effective and helpful to New England towns and cities as they strive to become resilient to future river floods.

The report's ­five target recommendations are:

According to the study, while rivers and streams have long been critical to the New England economy and the  recreation and environmental integrity of New England communities, they have become increasingly constricted by construction and attempts to control them. They have shown that when they flood, they swell even more than before, exert more force, and often carry more sediment and debris. These more powerful flooded rivers have the ability to destroy even our newest infrastructure—often with catastrophic results for roads, bridges, buildings and people. Replacement costs are enormous, and often repeat.