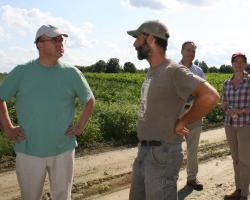 Congressman Jim McGovern (D-MA 2nd District) has an appetite for ending hunger. In late August, 2015, he took time from his hectic schedule to tour 13 small to medium-sized farms in his district. Among agenda items, he wanted to learn what was happening with local agriculture, how people are getting fed and how he could be helpful with issues faced by farmers. McGovern easily pulls together threads of connection between healthy food as medicine, Supplemental Nutrition Assistance Program (SNAP) beneficiaries and sustainable agricultural economies. An aspect of several local farms that interested him is their contribution of local produce to food banks and survival centers with some farms offering discounted CSA shares to low-income people.

All farms on the tour produce healthy crops, milk or meat (much of it organically-grown) and farmers value crop diversity as opposed to monocrops.

The two-day district-wide tour allowed him to witness agriculture up close and personal. McGovern observed organic growing practices at Atlas Farm in South Deerfield. Since 2004, they have grown to employ 40 people (managers, field crew, drivers), enjoy a loyal customer base and serve the Boston Farmer’s Market twice a week.  Owner, Gideon Porth, said the farm is all-organic. “The biggest challenges we face are weed control and skilled labor, especially farm managers,” he said. McGovern noted that the demand for organic food is increasing and farms such as Atlas are serving that need. UMass Professor, Frank Mangan, joined the tour and reported that the Sustainable Food and Farming courses are growing steadily with numbers of student enrollment skyrocketing. He speculated that this boost in interest should help meet the demand for skilled labor.

Joe Boisvert and his family have worked steadily to modernize maple sugaring which remains the main focus at North Hadley Sugar Shack. However, Boisvert knew full well that in order to thrive, he needed to diversify. He recently built a farm stand offering a delicatessen and locally-sourced products and just added The Farm Tale, a two-acre farm animal play park, another customer amenity. Moving from a majority of picturesque but inefficient tree taps to modern maple sugar production required the purchase of a reverse osmosis machine and large evaporator. This equipment has allowed him and his family to sleep at night rather than pulling round-the-clock shifts to boil down the sap. Of the 5,000 tree taps they install, 1,500 remain as maple sugar buckets.

The next stop on the afternoon tour brought McGovern’s entourage to Amherst. Farmers Jeremy Plotkin-Barker and Dave Tepfer manage North Amherst Community Farm (aka “Simple Gifts Farm”). Since 2006, they have worked hard to build connections between people and their food supply.  High and low tunnels extend the growing season, allowing them to grow and sell food year-round, making farming more economically viable. Jeremy grinned acknowledging that they do take off Thanksgiving week to enjoy delicious food and to spend time with their family. They work with closely with UMass Extension to train workers in pest management, among other techniques.

Heading north, McGovern discovered a newly-reclaimed community farm in Greenfield: Just Roots.  One of their main goals is to increase knowledge about and demand for local food in Franklin County. Following years of soil depletion by field corn, a robust fertility management program was instituted that utilizes regular soil testing to determine what materials need to be added each year for optimum soil health and growing conditions. After just four years, volunteers and staff have reclaimed five of sixty acres that contain community gardens, green houses, several acres devoted to CSA-shares and have recently added heritage pigs and chickens to add to natural soil fertility. Just last year, they donated 20,000 pounds of food to area pantries and shelters.  Jess Van Steensburg, Director of Management and Administration, says, “We are giving back to the land so it can give back to the community.” And they seem poised to continue to give back in spades.

The farm tour continued the following day in eastern Massachusetts with visits to Ragged Hill Farm in Brookfield, Royal Crest Farm in Spencer and several dairy, fruit and vegetable farms.  This swing through McGovern’s territory was a small agricultural sampling since his district boasts 1,000 farms.

Funding made available through USDA’s Natural Resource Conservation Service, FSA loans and the APR program have all helped these farmers buy and grow their businesses. However, as McGovern probed farmers about challenges they face, answers were quickly forthcoming:  heavy debt, purchasing expensive equipment, the need for local food processing plants, training and retention of farm managers, weather-related events, and promotion of winter famers’ markets.

Scott Soares, the United States Department of Agriculture's new state director for rural development, was one of many state and local officials who accompanied McGovern. Soares said it was important for McGovern to see the breadth of agriculture and to hear first-hand about successes and challenges to farming.

He called for creating sustainable agricultural economies in all 50 states, and encouraging support of local, independent farms.

McGovern remarked, “The Pioneer Valley is clearly a trailblazer on this issue of sustainable farming in the state and in the nation. “The people who do this love it. They work really hard, and at the end of the day they get to point to something they’ve produced. In Congress, we can work a whole week and I sometimes can’t point to anything we’ve accomplished. I’m kind of envious.”

McGovern said of his Congressional farm interests, “We want to be the wind at their backs. A farmers’ livelihood depends on the high quality of their crops and products. My goal is to learn about what they need and then to be helpful.” 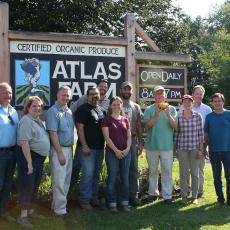 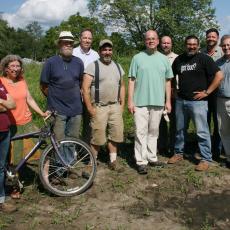 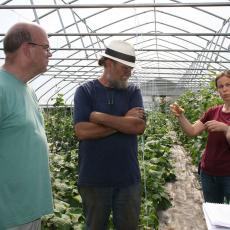 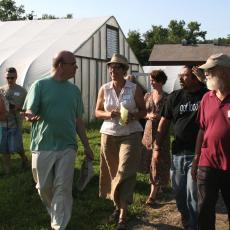 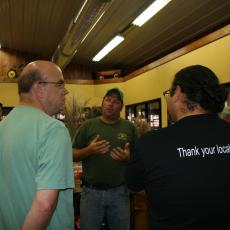