Curbing the Spread of Clubroot Disease in Nepal 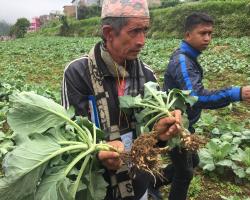 Rob Wick, professor of plant pathology and nematology in the Stockbridge School of Agriculture, was invited by USAID and Winrock (a leader in U.S. and international development with a focus on agricultural issues) to help farmers curb clubroot disease of brassica crops in Nepal. Clubroot is a serious soil-borne disease that affects brassica crops. Farmers cannot easily eliminate this disease, but they can learn methods for controlling the spread of infested plants and soil. This is a serious growing issue that needs systematic intervention and Wick was tapped to help them.

For three weeks in June, 2016, Wick trained trainers at the Sidhuwa Multipurpose Cooperative in the district of Dhankuta located in the eastern hills of Nepal. The farming cooperative is located at about a 7000 feet elevation and has about 1,200 households participating on about 4,000 acres of terraced hill gardens.

Nepal’s main cash crops are cabbage and cauliflower, most of which are exported to India. Because of clubroot disease, millions of dollars are lost each year in a country that already has limited resources. First reported in 1993, the incidence of clubroot is rising each year.  Clubroot is caused by Plasmodiophora brassicae, a devastating plant pathogen of the cabbage family.  This is not just a disease found in Nepal. It is problematic in community gardens as close as Amherst, Mass. Canada has been contending with clubroot in their massive canola crops for many years and it is spreading rapidly there.

The disease is named for the large clubby galls--in aggregate often as large as a tennis ball--that form on roots thereby restricting uptake of water and nutrients. This results in small, weak plants that produce little to no vegetables.  A single gall can release billions of resting spores into the soil which can survive a decade or more; thus contaminated soils cannot support brassica crops without crop rotations of about seven years.

Wick, twice a Fulbright Scholar, has been employed at the University of Massachusetts Amherst for 32 years. He is considered a world expert in plant pathology and diagnostics and is especially knowledgeable about clubroot disease. A USAID professional found him on the worldwide web and discovered he had worked with clubroot disease. Wick has extensive experience teaching diagnostics to plant pathologists, extension specialists and farmers in neighboring Bangladesh, so the team believed he would be a good choice for assisting Nepalese farmers.

He trained a group of about 50 older and younger farmers and extension specialists. Wick instructed them on clubroot biology, nematology, plant pathology, diseases of brassicas, fungicide use and integrated pest management for two weeks, and visited farmers’ fields where clubroot was rampant.  An interpreter was available at all times.

Do not start transplants in seedling beds that are contaminate with the clubroot organism.
Do not grow transplants of brassicas into soil that is known to be infested with resting spores for about seven years. Other crops (corn, beans, potatoes, etc.) can be grown in clubroot infested soil; they will not be affected by the disease, but all brassica crops are susceptible. Be careful not to introduce the pathogen into clean soils and this means cleaning all tools and footwear.
Steep hillsides are all terraced, so be mindful that contaminated soil on higher levels may wash down over lower ones with irrigation and rain.
Raise the pH of the soil to 7.2 with limestone.
If available, some chemicals are effective (in U.S., PCMB is used but it is not available in Nepal).
Finally, some disease-resistant cultivars are relatively new and should be tested in Nepal.

Wick has procured new disease-resistant seeds which he is sending to Nepal for testing. If the resistant cultivars perform well, this would be a great boon for the growers. He has applied for a USDA permit to have diseased ginger and cardamom shipped to UMass for diagnosis, yet another problem in the region. Ever helpful, Wick has been able to reach out across the world to share his skills and expertise. 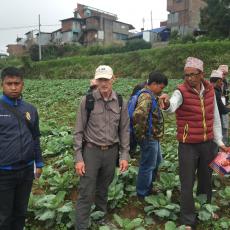 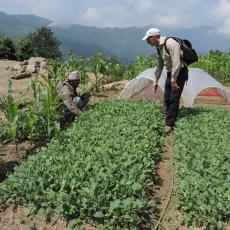 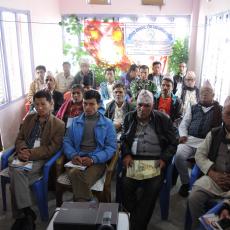 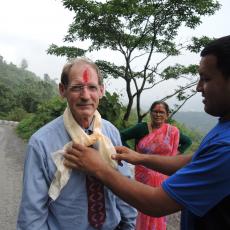 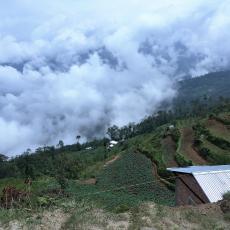