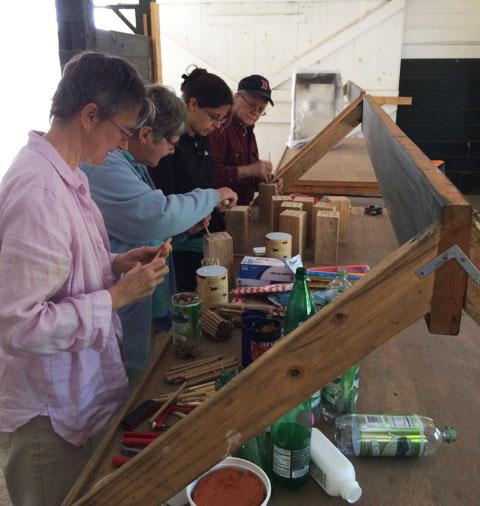 On the heels of a successful Spring 2014 Mass Aggie Seminar series held with two new partners in eastern Massachusetts, key organizer Sonia Schloemann (Extension Educator and Fruit Specialist at UMass Amherst), is already planning another set of programs next year with the two farms. Powisett Farm in Dover, Mass. and Tangerini Farms in Millis have been model collaborators, according to Schloemann.  “Powisett and Tangerini Farms were great co-hosts. They share similar values regarding investment in community education and we are delighted to be putting ideas together with them for spring 2015.”

Each year the UMass Stockbridge School of Agriculture and the UMass Extension unit of the Center for Agriculture, Food and the Environment offer one or more workshop series on topics of general interest to gardeners and small scale farmers.  In the past, workshops have been offered in fruit tree grafting, pruning, wildflower identification, and cider making.  The hope is to partner with farms and businesses throughout the Commonwealth to offer education around a specific topic. Recent seminars included: how to grow and prune berries, how to prune apple trees and start an apple orchard fruit wall, and ways to conserve native pollinators.  These seminars usually draw good crowds and help accomplish one of Extension’s goals: public education.

Who are these new partners?
Powisett Farm is owned and operated by The Trustees of Reservations (TTOR), a non-profit land conservation and historic preservation organization dedicated to preserving natural and historical places in the Commonwealth of Massachusetts. This Dover, Massachusetts farm has a long agricultural history: what began as a simple dairy farm many years ago became philanthropist Amelia Peabody’s legendary farm, famous for its breed stock of Hereford cattle and Yorkshire pigs.

Today, Powisett Farm is better known for its CSA (community supported agriculture) operation. In 2007, they began a CSA operation with 100 shares. In 2014, they are growing for 355 Summer CSA members and 200 Winter CSA members.  Powisett Farm also hosts an on-site farm stand three days per week, so that non-shareholders have access to their abundant produce. In addition to these outlets, this farm donates produce to five local hunger relief partners each week in order to make sure that produce reaches as many people as possible. As part of their mission, they host farm events such as UMass Mass Aggie Seminars. Farmer and manager Meryl LaTronica said, “We began working with UMass in a very intentional way.  Just as we blend CSA efforts, home gardening information and customer opportunities to volunteer, we are also committed to the ideals of Extension. We especially appreciated their support to local farmers who want to go organic or use IPM methods. They served as guides and gave such phenomenal support with useful advice and helpful perspectives. We look forward to working them again to build on the exchange of ideas and feel fortunate to learn from these fine educators.”

And in case you wondered, “Powisett” is described as an Indian village near Dedham.

Tangerini Spring Street Farm in Millis Massachusetts is owned by Laura and Charlie Tangerini. In 1982, its former owner, Louis DeAngelis, protected the land for farming by signing an Agricultural Preservation Restriction. In 1994, the Massachusetts Land Conservation Trust (MLCT), in accordance with Mr. DeAngelis wishes, evaluated proposals for farming this land and then chose the community-centered vision of the Tangerini’s, allowing them to become the new owners.

The diversified operations of the Tangerini farm include growing and selling a wide variety of vegetable and fruits using organic methods in 98% of crops. They also grow and sell a wide variety of herbs, vegetable plants, hanging baskets and annuals from their display greenhouse.  All produce, grown on 67 acres, is sold through a farm stand, a 300-member CSA that distributes from mid-April to mid-March, and local farmers’ markets. The owners also support other local growers and producers as well as local fishermen by making their products available at their farm.

Over the years, Tangerini’s Spring Street Farm has become a model for the preservation of open space for landowners who want to see their land remain productive while sharing it with future generations. The Tangerini’s also are noted for their hiring practices. Rather than hiring seasonal migrant workers, they employ local teens. “They are not the fastest workers.  I can probably out-pick them by double,” Laura says. “But it’s fine. I have them every year, I like doing it this way.”

When asked how they became involved with UMass Extension, Laura responded, “I am not shy or afraid to ask questions. I met Ruth Hazzard and other Extension educators at conferences over the years and they became interested in helping us. First, we learned about high tunnels and winter growing. Then the UMass vegetable team came to our farm to teach us to scout (hunt and remove pests) as we moved towards organic production.  At our first farm in Maine, we also worked with Extension when IPM was a newer concept. I find the methods of teaching by Extension educators to be kind and helpful, they are not judgmental at all. I suspect they get as much out of teaching as we do.” When asked if they would offer Mass Aggie seminars on their farm next year, Laura gave an enthusiastic thumbs-up.  “I want to be that place where people come and gather information to be better at what they do,” she said.

Spring 2015
Both farmers, Laura Tangerini and  Meryl LaTronica, have had positive experiences with UMass Extension, as part of the University’s century old tradition of taking education right to the community. At the start of the second century of Extension’s public outreach, faculty and staff are as pleased as these new partners about making a real difference. Back at UMass Amherst, Schloemann is already thinking up new workshops. 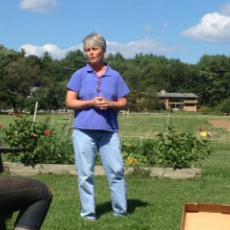 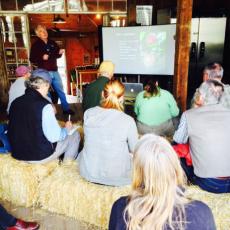 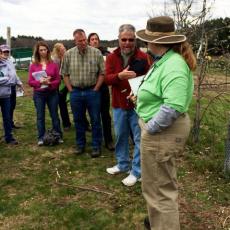 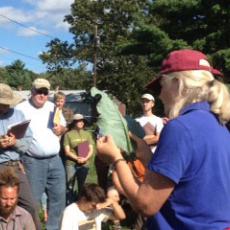