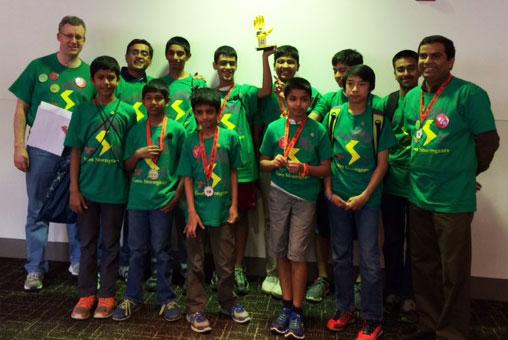 Massachusetts 4-H has yet another reason to be proud. The Green Stormgears from Westford, MA, took first place in the Champions Award Category as the best in judging and robot categories in the state. This afforded them the privilege of representing the Commonwealth in the Championship at the 2014 World Festival in St Louis Missouri on April 28.

So how did the Green Stormgears from Westford Youth Robotics 4-H Do?  More than 10,000 students from around the world, from ages 6 to 18, competed in 4 levels of competitions with more than 500 teams. After 2 days of competition, their robot performance was ranked 21st overall with a high score of 483 points, that’s 23 points better than their State Championship score.  The team was in the running for awards in multiple categories and took home 2nd place in Mechanical Design.  This award recognizes a team that designs and develops a mechanically sound robot that is durable, efficient and highly capable of performing challenge missions.  Check out the neat robotic trophy in photo gallery below. Congratulations to all these winning students! 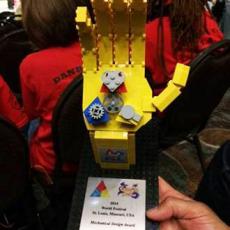