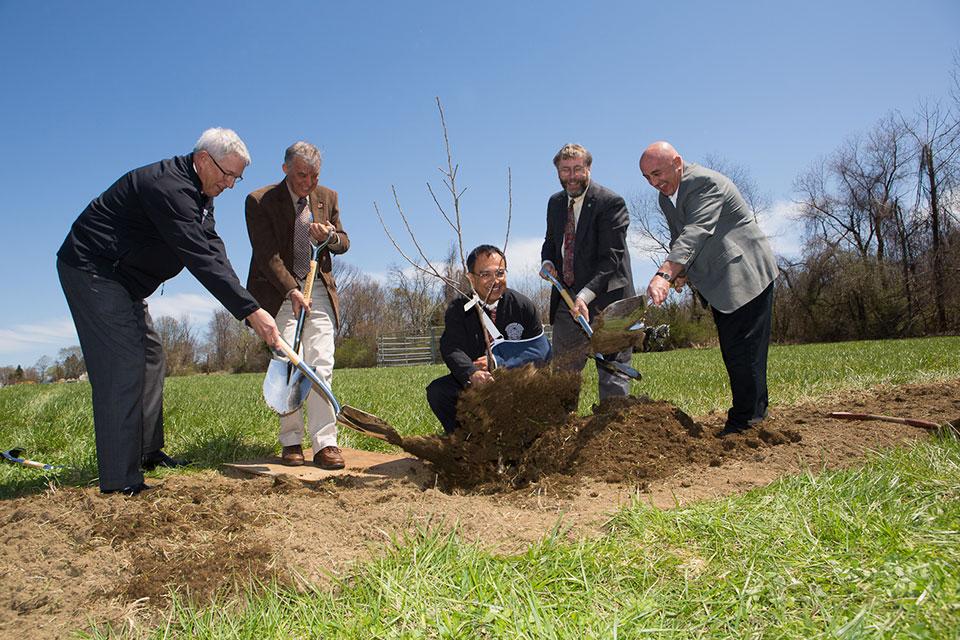 Against the backdrop of a picture perfect spring day, a groundbreaking ceremony was held for UMass Amherst’s new Agricultural Learning Center on April 25 on the former Adams-Wysocki field at the north end of the campus.  The guests included farmers, students, university officials, legislative representatives, neighbors, current and former staff and agricultural dignitaries.

Two members of the families that farmed the land until the University purchased it in the 1960's, Alice Wysocki and Jane Adams Roys, were honored guests and featured speakers at the event. Speaking on what was once her father’s land, Alice Wysocki, now 88, recalled the lively farming activity that took place at this site. “Small-scale and subsistence farming didn’t always used to be something you studied.  It was a very real way of life.” Miss Wysocki graduated from UMass in 1948 as a member of the first class of the newly-renamed University of Massachusetts. Now residing in New Hampshire, she lived with her sisters and parents in the white farmhouse next door, helping to grow and harvest crops.
Jane Adams Roys is the daughter of Robert C. Adams, owner of a bustling dairy farm that occupied about 20 acres adjacent to the Wysocki Farm.  Roys travelled from Florida with her family for this event, recalling the milking activities her family was involved with for decades.  Milk from their Jersey herd was delivered to families, restaurants and schools throughout Hampshire County. "It is a thrill for me to think that my heritage can be resurrected, to let others know there was a booming farm at one time,” she added.
Miss Wysocki concluded by saying, “I’m very pleased to be here today and see the way my father’s farm can be used for the good of the students.”

UMass Amherst Chancellor Kumble Subbaswamy remarked, “The new center represents the spirit of our history and the cutting edge of agricultural understanding. It will be a showpiece and destination for people to learn about agriculture.”  He said that he has officiated at many groundbreakings, but “never one for a barn raising.” Steve Goodwin, Dean of the University’s College of Natural Sciences, said “We want to turn this place into a dynamic center for the hands-on study of agriculture.”  UMass Center for Agriculture Director Stephen Herbert acknowledged that, although plans include moving an 1894 horse barn to the site and renovating for classroom use, “It’s not just about what happens in the barn, it’s really about what the students and professors are doing on the ground.” Rich Bonanno, President of Massachusetts Farm Bureau Federation, a major supporter of this project since its outset, noted that his organization has pledged $500,000 to help get the Learning Center launched.

A steady increase in interest in UMass’s agricultural programs (up 80 students from a handful or two in 2003) has led to the creation of this new hands-on learning laboratory.  Plans are to begin planting the field this season with corn, pumpkins and soybeans for harvest, fall, 2013. The field will evolve and transform over time to include fruit trees and shrubs, a modular ecological cropping design, sports turf with a 2-hole golf area, landscaping plots, bee forages, solar panels for electricity and, eventually the move of the horse barn to the site. The horse barn is the last remaining barn from the campus’ early days as Mass. Agricultural College. 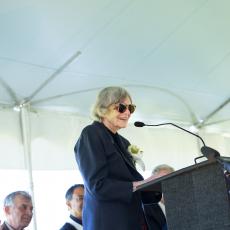 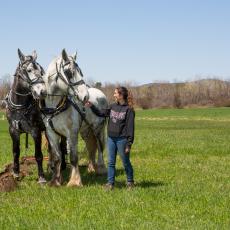