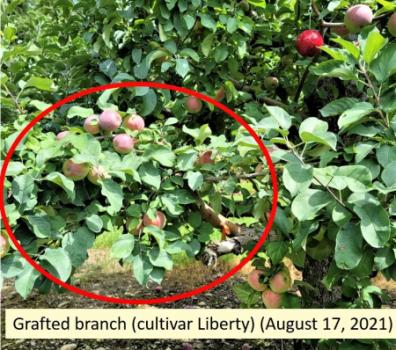 “Circle Your Wagons” was the cry of stagecoach drivers in the old west to prevent attacks while protecting those in the inner circle. Jaime Piñero, University of Massachusetts Amherst Extension professor, is researching a similar scheme to help apple growers. The big idea is to encircle the perimeter of an apple orchard with trap trees, ones that have six grafted branches added to them to catch the most egregious of insect pests. Grafts used are types of trees known for attracting insects harmful to apples.  This experiment looks promising after only two years.

“This is the most inexpensive method to help farmers that I can imagine. It is a simple grafting process with two to three trees on the perimeter of approximately 200 in an orchard.” Piñero explains that growers can start now and in three to five years will know if this approach is effective.  Meanwhile apple growers will need to keep doing what they are doing now with pest monitoring practices.  The research involves placing traps on both grafted and non-grafted trees. The level of fruit injury caused by pests is also recorded. “This approach is expected to save money on pesticides and other inputs, keeping dollars in the pockets of farmers,” he said.

Some types of apples are more susceptible to pests than others. This new method is a grower-friendly, low-cost, permanent integrated pest management (IPM) system involving trap crops (very attractive plants that pull pests away from the cash crop). In Massachusetts, New Hampshire and Maine, Piñero and his team have grafted six different types of apples onto selected perimeter-row trees in apple orchards so that growers can focus pest monitoring on those trees. Grafted cultivars include: Dabinett, Ginger Gold, Liberty, Red Astrachan, Wickson, and Yellow Transparent. Piñero explains, “If grafted trees prove to be effective ‘trap crops’, then growers could potentially reduce pesticide use while balancing the ecological, social, and economic aspects of farming to move toward sustainability.”

The first two years of the project have yielded promising results, in particular for apple maggot fly. As hypothesized, grafted trees are attracting at least twice as many pest flies as non-grafted trees. Similar results have been found for plum curculio and tarnished plant bug. Like other attract-and-kill strategies, the grafting method, if successful, would allow growers to spray a handful of trap trees on the perimeter instead of the entire orchard block. This new method is grower-friendly and inexpensive.

In early spring, Professor Piñero will send six grafts for each tree to anyone who is interested-email here.

For more detailed information, please see an article recently published in The Good Fruit Grower magazine. Piñero gratefully acknowledges support from the National Institute of Food and Agriculture (NIFA) at USDA and from the Massachusetts Society for Promoting Agriculture. He is grateful for scientific collaboration within New England and for the strong grower support for this project. 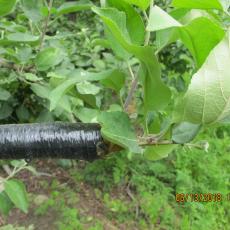